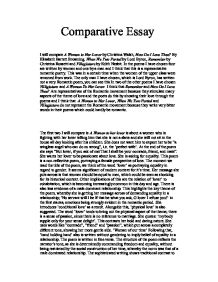 compare A Women To Her Lover by Christina Walsh, How Do I Love Thee? By Elizabeth Barrett Browning, When We Two Parted by Lord Byron, Remember by Christina Rossetti, and Villegiature by Edith Nesbit

Comparative Essay I will compare A Women to Her Lover by Christina Walsh, How Do I Love Thee? By Elizabeth Barrett Browning, When We Two Parted by Lord Byron, Remember by Christina Rossetti and Villegiature by Edith Nesbit. In the poems I have chosen four are written by women and one by a man and I think that this is a representative romantic poetry. This was in a certain time when the women of the upper class were removed from work. The only man I have chosen, which is Lord Byron, has written not a very Romantic poem, you can see this In two of the other poems I have chosen Villigiature and A Woman To Her Lover. I think that Remember and How Do I Love Thee? Are representatives of the Romantic movement because they stimulate many aspects of the theme of love and the poets do this by showing their love through the poems and I think that A Women to Her Lover, When We Two Parted and Villegiature do not represent the Romantic movement because they write very bitter words in their poems which could hardly be romantic. ...read more.

Christina Rossetti was the first Pre-Raphaelite poet. Her brother, Dante Gabriele Rossetti was a Pre-Raphaelite painter. Her father, Gabriele Rossetti was an Italian poet and a political asylum seeker from Naples and her mother, Frances Palidori was the sister of Lord Byron's friend and physician, John Williams Palidori. She was brought up in an artistic environment. This poem contrasts the various poems, already been analysed, bringing very different aspects of the theme of love. This poem is reflective; similarly in First Love and My Last Duchess, however instead of looking back on love, she is in dilemma regarding what to do, for the mess that she is in regarding love with loss A combination of happiness and sadness tends to run through many of Rossetti's poems, although in Remember, from the starting stanza which quotes 'Remember me when I am gone away', implies a loving, yet sad, request. One of the aspects of the theme of love evident in this posh sonnet is 'imperfect love'. This idea is based on the frequently used theme of religion in her work, since Rossetti was devoted to her Christian faith and love of God. ...read more.

Secrets and lies only leave to betrayal and loneliness. Byron uses imagery to describe the "morning dew" and how it reminds him of the "shame" he is in. His tone is shameful and his conscious is already getting to him. He, as the men in all the mentioned poems have been, is hurting because of her. He portrays her as cold "pale grew they cheeks and cold,/ colder thy kiss". He begins with this description of her at their separation; his description of her begins with the physical mention of her cheeks. This beginning admits the foreshadowing of continued sorrow throughout the poem when the speaker says "truly that hour foretold/ sorrow in this." This gives a negative connotation to the word "you" from the very beginning. In Lord Byron When We Two Parted George Gordon Noel Byron was born 22nd January 1788 in London and died 19th April 1824 in Missolonghi, Greece. He was among the most famous of the English 'Romantic' poets; his contemporaries included Percy Shelley and John Keats. He was also a comedian whose poetry and personality captured the imagination of Europe. I have attempted to compare A Women To Her Lover by Christina Walsh, How Do I Love Thee? By Elizabeth Barrett Browning, When We Two Parted by Lord Byron, Remember by Christina Rossetti, and Villegiature by Edith Nesbit. ...read more.