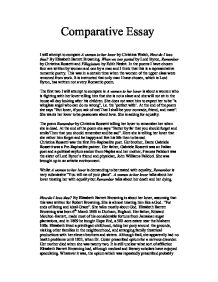 Compare A women to her lover by Christina Walsh, How do I love thee? By Elizabeth Barrett Browning, When we two parted by Lord Byron, Remember by Christina Rossetti and Villegiature by Edith Nesbit.

Comparative Essay I will attempt to compare A women to her lover by Christina Walsh, How do I love thee? By Elizabeth Barrett Browning, When we two parted by Lord Byron, Remember by Christina Rossetti and Villegiature by Edith Nesbit. In the poems I have chosen four are written by women and one by a man and I think that this is a representative romantic poetry. This was in a certain time when the women of the upper class were removed from work. It is instructed that only man I have chosen, which is Lord Byron, has written not a very Romantic poem. The first two I will attempt to compare is A women to her lover is about a women who is fighting with her lover telling him that she is not a slave and she will not sit in the house all day looking after his children. She does not want him to expect her to be "a wingless angel who can do no wrong", i.e. ...read more.

Elizabeth Barrett Browning was born 6th March 1806 in Durham, England. Her father, Edward Moulton-Barrett, made most of his considerable fortune from Jamaican sugar plantations, and in 1809 he bought Hope End, a 500-acre estate near the Malvern Hills. Elizabeth lived a privileged childhood, riding her pony around the grounds, visiting other families in the neighbourhood, and arranging family theatrical productions with her eleven brothers and sisters. Although frail, she apparently had no health problems until 1821, when Dr. Coker prescribed opium for a nervous disorder. Her mother died when she was twenty two. It is still unclear what sort of affliction Elizabeth Barrett Browning had, although medical and literary scholars have enjoyed speculating. Whatever it was, the opium which was repeatedly prescribed probably made it worse; and Browning almost certainly lengthened her life by taking her south and by his considerate attention. She died in his arms on 29th June 1861. ...read more.

In 1879 discovered she was pregnant and the baby was born two months after they were married on 22nd April 1880. When we two parted By Lord Byron is about him parting from his lover. Byron is very harsh in this poem "Long, long shall I rue thee". This proves the point that the women are living in a protected life and Byron is living in the real world. Is Byron seeing the real world and reacting to it? And are these women living in a utopia? George Gordon Noel Byron was born 22nd January 1788 in London and died 19th April 1824 in Missolonghi, Greece. He was among the most famous of the English 'Romantic' poets; his contemporaries included Percy Shelley and John Keats. He was also a comedian whose poetry and personality captured the imagination of Europe. I have attempted to compare A women to her lover by Christina Walsh, How do I love thee? By Elizabeth Barrett Browning, When we two parted by Lord Byron, Remember by Christina Rossetti, and Villegiature by Edith Nesbit. ...read more.