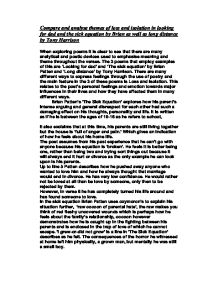 Compare and analyse themes of loss and isolation in looking for dad and the sick equation by Brian as well as long distance by Tony Harrison When exploring poems it is clear to see that there are many analytical and poetic devices used to emphasise meaning and theme throughout the verses. The 3 poems that employ examples of this are 'Looking for dad' and 'The sick equation' by Brian Patten and 'Long distance' by Tony Harrison. There are many different ways to express feelings through the use of poetry and the main feature in the 3 of these poems is Loss and isolation. This relates to the poet's personal feelings and emotion towards major influences in their lives and how they have affected them in many different ways. Brian Patten's 'The Sick Equation' explores how his parent's intense arguing and general disrespect for each other had such a damaging effect on his thoughts, personality and life. It is written as if he is between the ages of 10-16 as he refers to school, It also exclaims that at this time, his parents are still living together but the house is 'full of anger and pain.' Which gives an indication of how he feels about his home life. The poet assumes from his past experience that he can't go with anyone because his equation is 'broken'. He feels it is better being one, rather than being two and trying sort things out because it will always end it hurt or divorce as the only example he can look upon is his parents. ...read more.

The 2 poets mentioned both choose to use the word raw. Patten uses the word in the line 'raw cocoon of parental hate' while Harrison uses it in 'still raw love' When you think of 'raw' you imagine a red, fleshy wound, which brings lots of pain. This could be how Harrison's father felt at losing his wife and how Patten felt growing up. . It is a very powerful word and in both poems is used successfully Harrison described his parents' relationship and how much his father missed his wife when she passed away. '...Still raw love' is a useful insight into the sort of relationship Harrison's shared together which you can tell from this line alone was still going strong. It illustrates how attached the poet's parents were in life and death. You feel overwhelming sympathy for Harrison's father who seems to be in a state of denial because he can't seem to accept his wife's death. You can tell this as he is still doing all the everyday things like warming her slippers by the gas and renewing her transport pass, which he did for the many years that they were married. 'I believe that life ends with death and that is all.'. This is a line from 'Long Distance, which shows that Harrison, is a blunt, non-religious man. He does not believe in life after death so therefore does not consider the fact that his mother may still be around, if only in spirit. ...read more.

it has no verse breaks as it is 1 continuos verse which once more creates the child's perspective as when they speak they often don't stop to catch breath and this is what Brain Patten has tried to imitate in this form. Looking for dad is a very intriguing poem to read and I think that Brian Patten has captured the role of a child excellently and has portrayed the child's feelings of loss and isolation in a very intriguing and thoughtful manner. From comparing the 3 poems 'Looking for dad' 'The sick equation' and 'Long distance' it is clear to see how in their own unique ways they have captured and portrayed the feelings of loss and isolation in meaningful and clever manners. Looking for dad and the sick equation are both very similar poems as they are based around the same author and his own personal experiences. Long distance however still portrays these views just over a longer timespan and with more a feeling of loss of his parents rather than Brian Pattens childhood of family feuding. The 2 poets are extremely similar in the ways that they put their point across and there are even replicated words 'raw love' 'raw cocoon' which shows similar styles of writing. I believe that the way in which both poets captured their feelings and emotions throughout the poems made them very enjoyable to read as well as transferring their point across accurately to the reader. It is unclouded as to the mixed upbringing of the 2 poets and the way in which they both had experiences of loss and isolation each in their own unique and powerful way. ...read more.