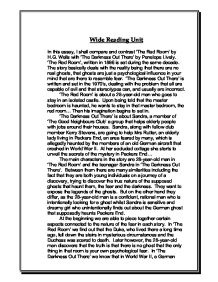 Wide Reading Unit In this essay, I shall compare and contrast 'The Red Room' by H.G. Wells with 'The Darkness Out There' by Penelope Lively. 'The Red Room', written in 1896 is set during the same decade. The story basically deals with the reality being that there are no real ghosts, that ghosts are just a psychological influence in your mind that are there to resemble fear. 'The Darkness Out There' is written and set in the 1970's, dealing with the problem that all are capable of evil and that stereotypes can, and usually are incorrect. 'The Red Room' is about a 28-year-old man who goes to stay in an isolated castle. Upon being told that the master bedroom is haunted, he wants to stay in that master bedroom, the red room... Then his imagination begins to set in. 'The Darkness Out There' is about Sandra, a member of 'The Good Neighbours Club' a group that helps elderly people with jobs around their houses. Sandra, along with fellow club member Kerry Stevens, are going to help Mrs Rutter, an elderly lady living in Packers End, an area feared by many, which is allegedly haunted by the members of an old German aircraft that crashed in World War II. ...read more.

We know they are disabled by the way that the 28-year-old man describes them. He talks about 'the man with the withered arm' and he says 'I heard the sound of a stick...as a second man entered more bent, more wrinkled, more aged' which shows that they are old, has a hunched back and can't walk properly. The elderly Mrs Rutter in 'The Darkness Out There' is isolated in her house by Packers End as it is cut off from most of society. In 'The Darkness Out There' age was represented on a poster for the good neighbours club as 'a jokey cartoon' with some small old people with spectacles which is a stereotype. The settings are similar, as they are both set in isolated areas that are associated with strange goings on, such as ghosts. Having them in isolated areas creates a tense atmosphere, as you are unable to obtain any kind of help as you are separated from the rest of the world. On the other hand the stories vary due to the castle/mansion in 'The Red Room' being dark and mysterious but Mrs Rutter's cottage is just an average cottage. On the subject of language, due to the large time difference and the author's different styles of writing, the two stories are written in completely separate ways. ...read more.