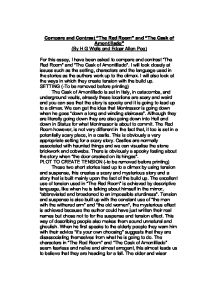 This is obviously a very appropriate setting for a scary story. Castles are normally associated with haunted things and we can visualise the stone brickwork and cobwebs. There is obviously a spooky feeling about the story when "the door creaked on its hinges". PLOT TO CREATE TENSION (-to be removed before printing) These two short stories lead up to a climax by using tension and suspense, this creates a scary and mysterious story and a story that is built mainly upon the fact of the build up. The excellent use of tension used in "The Red Room" is achieved by descriptive language, like when he is talking about himself in the mirror, "abbreviated and broadened to an impossible sturdiness". ...read more.

When he first speaks to the elderly people they warn him with their advice "it's your own choosing" suggests that they are disassociating themselves from what he is going to do. The characters in "The Red Room" and "The Cask of Amontillado" seem fearless and na�ve and almost arrogant, this almost leads us to believe that they are heading for a fall. The older and wiser people are evidently more 'aware' and more concerned, they the two characters into a false sense of security yet they are far more humble. In "The Cask of Amontillado" Fortunato seems so na�ve because even though he has insulted Montressor in some way he still assumes everything is sweet between them and that they are best friends, for example when "Fortunato possessed himself of my arm". ...read more.