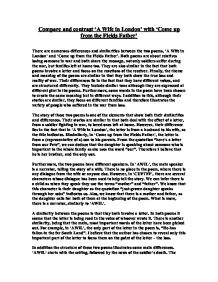 Compare and contrast A Wife in London(TM) w

Compare and contrast 'A Wife in London' with 'Come up from the Fields Father' There are numerous differences and similarities between the two poems, 'A Wife in London' and 'Come up from the Fields Father'. Both poems are about relatives losing someone in war and both share the message, not only soldiers suffer during the war, but families left at home too. They are also similar in the fact that both poems involve a letter and focus on the reactions of the receiver. Finally, the theme and meaning of the poems are similar in that they both show the true loss and reality of war. Their differences lie in the fact that they have different voices, and are structured differently. They include similar tone although they are expressed at different pint in the poems. Furthermore, some words in the poem have been chosen to create the same meaning but in different ways. I addition to this, although their stories are similar, they focus on different families and therefore illustrates the variety of people who suffered in the war from loss. The story of these two poems is one of the elements that show both their similarities and differences. Their stories are similar in that both deal with the effect of a letter, from a soldier fighting in war, to loved ones left at home. ...read more.

Also, each verse is about a different subject. For example, the first verse is the setting of the scene followed by the second verse which tells us about the wife receiving the letter regarding her husband's death. Unlike 'AWIL', the verses in 'CUFTFF' are not grouped into different parts. Furthermore, not all the verses focus on different subjects. Verses 2, 3 and 4 for example, are all setting the scene of the poem. Whether the poem rhymes or not is another element that shows a difference between the poems. The rhyming pattern of 'AWIL' is, a b b a b. however, 'CUFTFF' does not rhyme at all. The length of each verse can also be used to illustrate a difference between the poems. The verses of 'AWIL' seem to be organised to consist of five lines every time, whereas the verses of 'CUFTFF' do not appear to have a set number of lines; each verse has a random number of lines. The length of the two poems is noticeably different, with 'AWIL' being much shorter than 'CUFTFF'. From reading the poems, you can realise that 'CUFTFF' is much more descriptive than 'AWIL'. We are given details of how the characters are related to each other, by reading "mother", "father" and "son". Also, we are given a very clear and precise description of the setting, compared to 'AWIL'. ...read more.

The mood suddenly turns darker and depressing. The quotation "the fog hangs thicker" when the poem is referring to the next day, implies that matters are worse, as the wife has been waiting all this time for bad news. The next part of the poem, when the wife is reading the letter from her husband, is ironic but also has a sense of happiness; the husband has written about all the things he hopes to do with his wife when he returns home. The words "penned in highest feather" indicate that the husband was in a very hopeful and optimistic mood, and so this changes the tone of the poem. Towards the end of 'CUFTFF' the tone of the poem takes an unexpected turn when the reader is shocked with the words 'he is dead already'. Instantly, the mood is changed to misery and hopelessness. Like 'AWIL', this poem uses irony but in a different way, as the family received the letter of hope after the son had died. This leaves the poem on a note of despair. In conclusion the audience of the two poems can see how different strategies of approaching similar stories can change the way meaning is illustrated. The main similarity between the two poems is their message although they have been expressed in some very dissimilar ways. The main difference between the two poems is their structure and methods of bringing the pint of the poem across to the reader. ...read more.