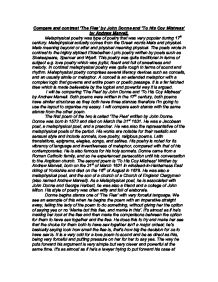 Compare and contrast The Flea(TM) by John Donne and To His Coy Mistress(TM) by Andrew Marvell.

Compare and contrast 'The Flea' by John Donne and 'To His Coy Mistress' by Andrew Marvell. Metaphysical poetry was type of poetry that was very popular during 17th century. Metaphysical actually comes from the Greek words Meta and physical. Meta meaning beyond or after and physical meaning physical. The poets wrote in contrast to the highly stylized Elizabethan Lyric poetry written by poets such as Shakespeare, Spencer and Wyatt. This poetry was quite traditional in terms of subject e.g. love poetry which was joyful, fluent and full of sweetness and melody. In contrast metaphysical poetry was quite rough in terms of sound and rhythm. Metaphysical poetry comprises several literacy devices such as conceits, and an usually simile or metaphor. A conceit is an extended metaphor with a complex logic that governs and entire poem or poetic passage. It is a far fetched idea which is made believable by the logical and powerful way it is argued. I will be comparing 'The Flea' by John Donne and 'To His Coy Mistress' by Andrew Marvell. Both poems were written in the 17th century, both poems have similar structures as they both have three stanzas therefore I'm going to use the layout to organise my essay. I will compare each stanza with the same stanza from the other poem. The first poem of the two is called 'The Flea' written by John Donne. Donne was born in 1572 and died on March the 31st 1631. He was a Jacobean poet, a metaphysical poet, and a preacher. He was also the representative of the metaphysical poets of the period. His works are notable for their realistic and sensual style and include sonnets, love poetry, religious poems. Latin translations, epigrams, elegies, songs, and satires. His poetry is noted for its vibrancy of language and inventiveness of metaphor, compared with that of his contemporaries. He is also famous for his holy sonnets. ...read more.

In my opinion I think this stanza is enough to make any women feel uncomfortable around him and scared of him. She very well may just sleep with him because of the fact she is scared of him. In the final stanza of Donne's poem 'The Flea' the women manages to kill the flea like she wanted to in the stanza before. She kills him with her nail and this is made clear in the opening line of the stanza: 'Cruell and sodaine, has thou since purpled thy naile'. However, Donne does his very best to make her feel as guilty as possible, he does this by saying 'blood of innocence?' which basically means that Donne is trying to compare his women killing the flea to Jesus being killed without reason, again he brings in religion to back up his argument. He does this because she is a religious person, so doing this will have more of an effect on her. He also points out the fact that the only thing the flea ever did wrong was take blood - it didn't actually do anything else wrong to her, so why kill it? It becomes clear that he said this as he says: 'In what could this flea guilty bee, except in that drop which it suckt from thee?' But I think that the flea represented more than that. It represented the reason for them sleeping together, and if she killed the flea she would be consequently killing his argument, this would make the women feel as if she's won and he has nothing left to argue for. Unfortunately for her, what she isn't expecting is that Donne manages to turn the whole argument around and is on top again. One of the lines in this stanza shows that she doesn't feel anything different now the flea is dead to when it was alive - 'Find'st not thyself, nor mee the weaker now' He also turns this around and uses it against her and is quite domineering in the fact that he is winning the argument. ...read more.

In conclusion the two poems have been written so try and get a woman to sleep with the men. But both men do this in different ways, Donne uses very persuasive and lawyer like language, whereas Marvell goes from flattering her to trying to persuade her to quite blatantly trying to scare her, to a mixture of the two. But they are both very similar as they use far fetched ideas to back up their ideas. I think that Donne uses a more far fetched idea than Marvell, and because of this Donne would be less successful in achieving what he wants. Also Marvell would be more successful as he compliments his women and he exaggerates how much she means to him, he flatters her and awful lot, which is what a woman wants to hear. It's almost as if Donne is trying to persuade her into bed, whereas Marvell charms her, most women would rather be charmed into bed than persuaded, and also because of this I think he would be more likely to get her into bed. I personally preferred 'His Coy Mistress' to 'The Flea' mostly because it's a lot easier to understand first time round, unlike 'The Flea' which takes a lot more reading between the lines. I favored the language used in Marvell's poem and I also liked the way he put forward his argument of time. I was able to relate more to Marvell poem, as I've never heard an argument been put forward using anything as ridiculous as a Flea, I also can see how she would feel after reading parts of this poem - loved and adored. I do appreciate Donne's poem, but I don't appreciate it as much mostly because its not as romantic, and I don't see how something as beautiful and as complicated as love can be compared to something as ugly and simple as a flea. The language in 'The Flea' is also aggressive and pushy in some parts. The manipulation through out the poem is what brought me to dislike it and the theme. Megan Aston. . ...read more.