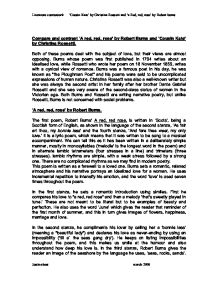 Compare and contrast 'A red, red, rose' by Robert Burns and 'Cousin Kate' by Christina Rossetti.

Compare and contrast 'A red, red, rose' by Robert Burns and 'Cousin Kate' by Christina Rossetti. Both of these poems deal with the subject of love, but their views are almost opposing. Burns whose poem was first published in 1794 writes about an idealised love, while Rossetti who wrote her poem on 18 November 1859, writes with a cynical view of romance. Burns was a famous poet in his day, he was known as "the Ploughman Poet" and his poems were said to be uncomplicated expressions of human nature. Christina Rossetti was also a well-known writer but she was always the second artist in her family after her brother Dante Gabriel Rossetti and she was very aware of the second-class status of women in the Victorian age. Both Burns and Rossetti are writing narrative poetry, but unlike Rossetti, Burns is not concerned with social problems. 'A red, red, rose' by Robert Burns. The first poem, Robert Burns' A red, red rose, is written in 'Scots', being a Scottish form of English, as shown in the language of the second stanza, 'As fair art thou, my bonnie lass' and the fourth stanza, 'And fare thee weel, my only luve.' It is a lyric poem, which means that it was written to be sung to a musical accompaniment. We can tell this as it has been written in a deliberately simple manner, mostly in monosyllables ('melodie' is the longest word in the poem) ...read more.

In the opening stanza our nameless narrator tells us she was a cottage maiden, 'maiden' meaning both an unmarried girl and also an old-fashioned word for 'a virgin'. She gives us an insight of what her life was like before, putting her in a countryside setting. She also gives us an image of what she looked like, 'my flaxen hair', 'hardened by sun and air'. We understand that she was both very pretty and used to working hard for a living, which emphasizes that she was not looking for a man. This means that she was an innocent victim of a richer man. This is shown by the repetition of "Why did a great lord find me out?" In the second stanza, she tells us how the lord (the "lord of the manor" in her farming community) lured her to be his mistress and gave her joy and love but then things changed. She uses a paradox when she says she led 'a shameless shameful life,' meaning she was 'shameless' when she was in love but 'shameful' was society's view. This is a clever contradiction that makes us aware of the difference between her view and society's view. She also states she was 'an unclean thing' which shows Victorian social standards. She compares how he treated her with two similes - 'he wore me like a silken knot' and 'he changed me like a glove'. ...read more.

This is shown by the narrator's love and pride in her son ('my fair-haired son, my shame, my pride, cling closer, closer yet'). I personally prefer Robert Burn's poem 'A red, red, rose', to Christina Rossetti 'Cousin Kate'. Christina Rossetti leaves the reader, me, feeling sorry for her, not only because of what has happened to her but also because she is living for a dream that will never come true. She shows jealousy towards her cousin but uses the fact that she has a son by the Lord (and her cousin does not) as a object to keep her dream alive. Rossetti makes us feel sad for the narrator but shows that she is bitter and jealous, which lessens my sympathy for her. Whereas Robert Burns I enjoyed reading and did read over many times because it is light hearted, warm and easy reading. It also shows of a man that is deeply in love with his lover and has written this poem to show his compassionate love for her. The way he writes this poem makes the reader, me, feel as if we are there and can see how beautiful his love is. I felt joy and delight just thinking of how devoted he feels towards his lover. This poem left a smile on my face and a warmth in my heart. ?? ?? ?? ?? Literature coursework 'Cousin Kate' by Christina Rossetti and 'a Red, red, rose' by Robert burns Justine best march 2006 ...read more.