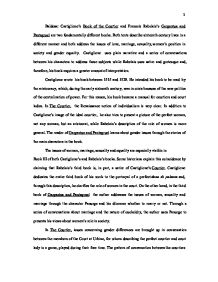 Compare and contrast - Baldesar Castiglione's Book of the Courtier and Francois Rabelais's Gargantua and Pantagruel.

Baldesar Castiglione's Book of the Courtier and Francois Rabelais's Gargantua and Pantagruel are two fundamentally different books. Both texts describe sixteenth century lives in a different manner and both address the issues of love, marriage, sexuality, women's position in society and gender equality. Castiglione uses plain narrative and a series of conversations between his characters to address these subjects while Rabelais uses satire and grotesque and, therefore, his book requires a greater amount of interpretation. Castiglione wrote his book between 1515 and 1528. He intended his book to be read by the aristocracy, which, during the early sixteenth century, was in crisis because of the new politics of the centralization of power. For this reason, his book became a manual for courtiers and court ladies. In The Courtier, the Renaissance notion of individualism is very clear. In addition to Castiglione's image of the ideal courtier, he also tries to present a picture of the perfect woman, not any woman, but an aristocrat, while Rabelais's description of the role of women is more general. The reader of Gargantua and Pantagruel learns about gender issues through the stories of the main characters in the book. The issues of women, marriage, sexuality and equality are especially visible in Book III of both Castiglione's and Rabelais's books. Some historians explain this coincidence by claiming that Rabelais's third book is, in part, a satire of Castiglione's Courtier. Castiglione dedicates the entire third book of his work to the portrayal of a perfect dona di palazza and, through this description, he clarifies the role of women in the court. On the other hand, in the third book of Gargantua and Pantagruel the author addresses the issues of women, sexuality and marriage through the character Panurge and his dilemma whether to marry or not. Through a series of conversations about marriage and the nature of cuckoldry, the author uses Panurge to presents his views about women's role in society. ...read more.

In short, Rabelais's book does not make women unequal to the same degree as The Courtier does; in contrast, it perceives as women not only as unequal, but as inferior to men, as beings created by nature for the aid and pleasure of men. For both Castiglione and Rabelais, the issues of seduction, love and marriage seem to be prominent. In Castiglione's book, as David Quint suggests, most of the qualities acquired by the courtier are a means by which to seduce women and the role of the courtier is reduced to that of "a cynical seducer."17 Quint's observation is conformed by conversation between the court members. They all seem to agree with the idea that serving and adoring the ladies is an important part of court life. Even Signor Magnifico, the most moderate of Castiglione's characters, does not seem to oppose this view. In The Book of the Courtier, Castiglione holds that the courtier "employs [all of the] noble exercises, the elegance of dress and the fine manners (...) as a means of gaining the favor of women." 18 Castiglione's courtier adores the ladies just as he adores the prince. He tries to impress his lady at every occasion. It sometimes implies a certain hypocrisy. For example, one of Castiglione's characters believes that men, knowing that they are watched by women, should even risk their lives in battle in a display of extraordinary courage in order to win a lady's appreciation. The lady from the Courtier, is constantly seduced so much so that she cannot "awaken at night without hearing music, or at least that restless soul moving about the walls of the house with sighs and plaints."19 As a response to the man's attempt at seduction, Castiglione's dona di palazza should act modestly. She should not be open in conversation about love and should restrain from giving any signs of affection, but she should give her admirer other incentives to adore her. ...read more.