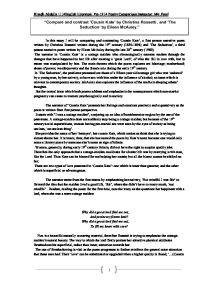 Compare and contrast 'Cousin Kate' and 'The Seduction'.

In this essay I will be comparing and contrasting 'Cousin Kate', a first person narrative poem written by Christina Rossetti written during the 19th century (1830-1894) and 'The Seduction', a third person narrative poem written by Eileen McAuley during the late 20th century (1980). The narrator in 'Cousin Kate' is a cottage maiden who chronologically narrates readers through the changes that have happened to her life after meeting a 'great Lord', of who she fell in love with, but in return was manipulated by him. The main themes which the poem explores are Marriage; motherhood; abuse of power; wealth/poverty and the female role during the early 19th century. In 'The Seduction', the problems presented are those of a fifteen year old teenage girl who was 'seduced' by a young man, by her naivety, to have sex with him under the influence of alcohol; an issue which is relevant to contemporary society. McAuley also explores the influence of the media in shaping others' thoughts. But the central issue which both poems address and emphasise is the consequences which non-martial pregnancy can cause to women: psychologically and in society. The narrator of 'Cousin Kate' presents her feelings and emotions precisely and expressively as the poem is written from first person perspective. It starts with "I was a cottage maiden", conjuring up an idea of banishment or neglect by the use of the past-tense. A cottage-maiden does not suddenly stop being a cottage maiden; but because of the 19th century social superstitions, women having pre-marital sex were seen by the eyes of society as being unclean, 'an unclean thing'. She provides the name of her 'betrayer', her cousin Kate, which makes us think that she is trying to almost shame her. It is ironic, thus, that she has named the poem by Kate's name because one would only name a literary piece by someone else's name as sign of tribute. Women, generally, during early 19th century Britain, did not have the right to acquire quality jobs. ...read more.

In-fact, some men can be hypocrites. The young man, the seducer, the predator of the game, accompanying the girl calls her a "little slag". What if the girl over-heard it and wanted to reply? She wouldn't find a vulgar word as precise in description as 'slag' in English. Derogatory terms to insult women prevail. This is all part of the 'feminine void' which McAuley describes. The narrator's love in 'The Seduction' is shown when she says, "To fill my heart with care." The cottage maiden's reference to her heart reinforces that her love is inner, and not superficial. This is because the heart is the 'soul' of one's body. It is referred to when emotion is described. Her misunderstanding, and the Lord's successful seduction, is not surprising. During the early 19th century, women seldom talked to or had pre-marriage relationships with other men; hence she did not understand the element to the Lord's manipulative, rather than loving, behaviour. As the poem has been written after the events took place, "To fill my heart with care?" can be interpreted in two ways; one during and after their meeting. During their meeting the quote can be interpreted to show the cottage maiden's happiness, finding someone who would 'care', and love her back in a requited way. Another, opposite interpretation after their meeting can mean that the cottage maiden is full of remorse for falling into his trap. Therefore 'care' in this situation can represent life's woes; it is something that she despises but even-so, her heart is full of those inevitable feelings, 'fill my heart'. This is further elaborated on the second line in stanza two after he had lured her, "Woe's me for joy thereof." This explains how the lord has used the cottage maiden for his own sexual pleasure, whilst she feels uncomfortable and in pain. This is emphasising the Lord's almost predatory behaviour, as sex, morally, should not be conducted unless there is a mutual desire to do so. ...read more.

Her character is strong, and her refusal to marry, despite being proposed to two times emphasises her lack of hypocrisy and her contentment in her belief of what is right and wrong. She expresses issues which poor women felt the need to be voiced about, such as the cottage-maiden in the poem, with great delicacy showing their neglect by society for merely indulging in a 'sinful' act such as pre-marital sex which they are half-responsible for. The same theme is emphasised by other writers at that time too, such as Jane Austen, a British novelist, in her book Pride and Prejudice. This, like in 'Cousin Kate', speaks about the vitality of good upbringing of a young person with a character and a sense of morality to help them see past the superficiality which they may encounter. And to think about the consequence of their action before committing it, social standings and wealth are not necessarily advantageous. This can link to the way which the Lord did not think about the issue of pregnancy before sexually taunting the cottage-maiden; if he had, he would not have been faced with a child which he would have to accept. Eileen McAuley, however, explores the effects of Alcohol on young-people during the '80s, where drinking was becoming a popular and casual attitude to youngsters. Her choice of character, the teenage naive girl, is perfect to portray the effects of the Media and how teenage pregnancies, even in the late 20th century in the UK, was seen as an absurd, new issue; hence the girl's helplessness in the poem where she isolates herself from everyone else; with a full paranoiac affliction. Personally, I have preferred the style which Rossetti incorporates in her emotional literary poem, 'Cousin Kate'. It truly shows how a woman, despite being neglected by society in general, manages to overcome her feelings deciding to employ her pregnancy for a cause, like avenging herself against her betrayers. ?? ?? ?? ?? Riyadh Abdulla 11J4 English Literature: Pre-1914 Poetry Comparison Instructor: Mrs Patel ...read more.