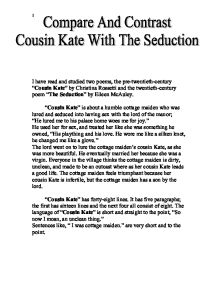 Compare and contrast Cousin Kate with the seduction.

I have read and studied two poems, the pre-twentieth-century "Cousin Kate" by Christina Rossetti and the twentieth-century poem "The Seduction" by Eileen McAuley. "Cousin Kate" is about a humble cottage maiden who was lured and seduced into having sex with the lord of the manor; "He lured me to his palace home woes me for joy." He used her for sex, and treated her like she was something he owned, "His plaything and his love. He wore me like a silken knot, he changed me like a glove." The lord went on to lure the cottage maiden's cousin Kate, as she was more beautiful. He eventually married her because she was a virgin. Everyone in the village thinks the cottage maiden is dirty, unclean, and made to be an outcast where as her cousin Kate leads a good life. The cottage maiden feels triumphant because her cousin Kate is infertile, but the cottage maiden has a son by the lord. "Cousin Kate" has forty-eight lines. It has five paragraphs; the first has sixteen lines and the next four all consist of eight. The language of "Cousin Kate" is short and straight to the point, "So now I moan, an unclean thing." ...read more.

I think the writer Eileen McAuley has done this to emphasise the girl's age. These poems have many things in common. For example they are both about young ladies that have a baby out of marriage with someone they don't love; both the fathers don't want anything to do with their child. Also both the authors were women. The women both feel used by the men they slept with; " Call me an outcast thing." From "Cousin Kate" and " Than to have the neighbours whisper that 'you always looked the type'." Also they were both treated badly by people that don't know the whole story. The poems are also both different in many ways. The young lady in "Cousin Kate" lived in the 19th Century, was in her early twenties, she was frowned upon because she had a child out of wedlock, "My fair-haired son, My shame." Also she had sex out of her own sober free will and was not intoxicated or influenced by anything. While the girl in "The Seduction" lived in the later part of the eighties, she was only sixteen; people frowned her upon because she has had a teenage pregnancy not because she wasn't wedded. ...read more.

regardless of what mite happen to the person. This poem makes me feel deeply sad for the girl and her unfortunate situation, I can relate to her quite well because we are the same age and I have seen some people in similar situation. I prefer "Cousin Kate" Christina Rossetti's poem because it is no where near as grim or bitter as Eileen McAuley's poem "The Seduction". I also prefer "Cousin Kate" to the "The Seduction" because it becomes more cheerful at the end, and doesn't leave you depressed and disheartened like "The Seduction" does, "And better, now, to turn away, move away, fade away, than to have the neighbours whisper 'you always looked the type'." These are the last lines of "The Seduction" they make feel sad and leave me with bitter thoughts carved inside my mind. I think that the attitude to teenage pregnancy has always been a sore subject and always frowned upon by society, but overall it hasn't changed but has become more lenient over time, because the narrator in "Cousin Kate" was socially discarded for having a child out of wedlock while she was in her early twenties. "The neighbours whisper 'you always looked the type'." A hundred years later in a more relaxed society the girl in "The Seduction" was treated the same, pushed away when she was at her time of need. 1 ...read more.