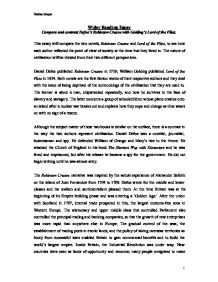 Compare and contrast Defoe's Robinson Crusoe with Golding's Lord of the Flies.

Wider Reading Essay Compare and contrast Defoe's Robinson Crusoe with Golding's Lord of the Flies. This essay will compare the two novels, Robinson Crusoe and Lord of the Flies, to see how each author reflected the point of view of society at the time that they lived in. The nature of civilisation will be viewed from their two different perspectives. Daniel Defoe published Robinson Crusoe in 1719; William Golding published Lord of the Flies in 1954. Both novels are the first fiction works of their respective authors and they deal with the issue of being deprived of the surroundings of the civilisation that they are used to. The former is about a man, shipwrecked repeatedly, and how he survives in the face of slavery and savagery. The latter concerns a group of schoolchildren whose plane crashes onto an island after a nuclear war breaks out and explains how they cope and change as time wears on with no sign of a rescue. Although the subject matter of these two books is similar on the surface, there is a contrast in the way the two authors represent civilisation. Daniel Defoe was a novelist, journalist, businessman and spy. He defended William of Orange and Mary's rise to the throne. He attacked the Church of England in his book The Shortest Way with Dissenters and he was fined and imprisoned, but after his release he became a spy for the government. He did not begin writing until he was almost sixty. ...read more.

The main character in Lord of the Flies is named Ralph and this story starts with another boy and him discussing what happened to the plane that they were in. After finding more children and no adults he called a meeting where he said, "Seems to me that we ought to have a chief to decide things." This shows he had some views on the need for planning. Jack, another boy, also had some sense of civilisation: "After all, we're not savages. We're English; and the English are best at everything." This is ironic, as later on he is the one to break all the rules and become the chief of the savages. Eventually they came to a disagreement over a signal they had lit to try and attract rescue ships. Ralph wanted to keep it going, but the other children wanted to hunt animals. The group acted like a savage tribe and eventually chooses to abandon civilised living: one of Ralph's friends, Piggy, offers the choice: "Which is better - to be a pack of painted niggers like you are, or to be sensible like Ralph is? ... Which is better - to have rules and agree, or to hunt and kill? ... Which is better, law and rescue, or hunting and breaking things up?" The group then killed him and Ralph was running for his life. He represents a leader of a democratic society, which soon collapsed. "One chanced nothing! ...read more.

William Golding essentially believes that all humans are evil inside, but it is just that civilisation puts pressure on you to keep in place and if it were not for the controls present in civilised society, we would all be like the savage group. "There was no Piggy to talk sense. There was no solemn assembly for debate nor dignity of the conch." The Navy officer who arrived to take them back to the waiting ship said, "I should have thought that a pack of British boys would have been able to put up a better show than that." Robinson Crusoe, on the other hand, arrived home with Friday (his servant) and immediately wanted to set sail again for South America. "My true friend the widow earnestly diswaded me from it, and so far prevail'd with me, that for almost seven years she prevented my running abroad." This shows that he still had an adventurous spirit and was willing to go out again confident that he would be able to cope with any troubles. Both stories show that civilisation needs controls before it is effective; rules need to be enforced and reason alone may not be enough to ensure survival. Crusoe may not have survived without his gun and Ralph had nothing to protect himself with when the symbol of civilisation (the conch) was broken. In spite of this similarity, Defoe's book presents a positive outlook for the future of humanity as civilisation spread across the globe, whereas Golding's work suggested that the weapon would be used not to support civilisation, but to destroy it. Both reflect the world view of their times. Nathan Mayer 1 ...read more.

This piece shows a good contextual understanding of the novels and the impact these contexts had on the writers. While this is relevant I would advise spending more time analysing the texts for similarities and differences and considering how the authors may have presented similar ideas in different ways.