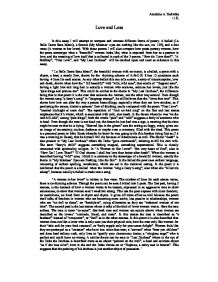 Compare and contrast different forms of poetry - A ballad (La Balle Dame Sans Merci), a Sonnet (My Mistress' eyes are nothing like the sun, no. 129), and a free verse (A woman to her lover).

Love and Loss In this essay I will attempt to compare and contrast different forms of poetry. A ballad (La Balle Dame Sans Merci), a Sonnet (My Mistress' eyes are nothing like the sun, no. 129), and a free verse (A woman to her lover). With these poems I will also compare how poets portray women, how the poets stereotype what a "beautiful" woman looks like, what is expected from her as a partner in love, and the meaning of love itself that is reflected in each of the 3 poems. "How do I love thee?", "A birthday", "First Love", and "My Last Duchess" will be touched upon and used as reference in this essay. " Le Belle Dame Sans Merci", the beautiful woman with no mercy, is a ballad, a poem with a rhyme, a beat, a steady flow, shown by the rhyming scheme of A-B-C-B. It has 12 quartrains each having 4 lines for each stanza. As any other ballad this one tells a story, a story of misconception, love and death, shown when how the " full beautiful" ...read more.

The theme "death" is also present in "My Last Duchess" where the Duke "gave commands", ordering to kill his own wife. The term "faery's child" suggests something magical, something supernatural. This is closely connected with spirituality, religion. In "A Woman to Her Lover": "the very heart of God", also in "How Do I Love Thee?" "If God choose I shall but love thee better after death". When the woman is described having "wild" eyes, I think it is contrary to the stereotype of a beautiful woman, exactly the theme in "My Mistress' Eyes are Nothing Like the Sun". In the ballad the poet uses archaic language, consisting of archaic spelling, vocabulary, which are set in the medieval setting. In the poem it is reinforced that the poem is a ballad when the woman "sing a faery's song", also when she "lulled me asleep", because usually a ballad is made into a song. "A woman to her lover" is written in free verse. ...read more.

as an object "painted on the wall", a dead and animate object "as if she was alive"; how in the end the Duke moves on to "Neptune, a rarity cast in bronze". This suggests that the painting of his duchess is just another object of possesion. � "My Mistress' Eyes are Nothing Like the Sun" is a sonnet with a rhyming scheme of A-B-A-B. He tries to go against the sterotype of what a beautiful woman posses physically and mentally. He's being a little modest describing his mistress; "eyes nothing like the sun", "breasts are dun", "breath that from my mistress reeks". The last two lines sums up the whole sonnet explaining how his love to a woman who is not perfect is something of a rarity and is more realistic and sincere compared with other poets who have gross exaggerations, hyperboles praising their mistress. This poem also has reference to religion, like the words "heaven" and "goddess". Here love is defined as a state of mind surpassing what can be seen by the eye, smelt, or felt. Arnoldus A. Nedwika 11JL ...read more.