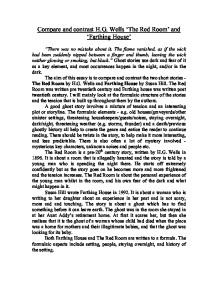 Compare and contrast H.G. Wells 'The Red Room' and 'Farthing House' "There was no mistake about it. The flame vanished, as if the wick had been suddenly nipped between a finger and thumb, leaving the wick neither glowing or smoking, but black." Ghost stories use dark and fear of it as a key element, and most occurrences happen in the night, and/or in the dark. The aim of this essay is to compare and contrast the two short stories - The Red Room by H.G. Wells and Farthing House by Susan Hill. The Red Room was written pre twentieth century and Farthing house was written post twentieth century. I will mainly look at the formulaic structure of the stories and the tension that is built up throughout them by the authors. A good ghost story involves a mixture of tension and an interesting plot or storyline. The formulaic elements - e.g. old houses/graveyards/other sinister settings, threatening housekeepers/guests/noises, staying overnight, dark/night, threatening weather (e.g. storms, thunder) and a death/previous ghostly history all help to create the genre and entice the reader to continue reading. There should be twists in the story, to help make it more interesting, and less predictable. There is also often a lot of mystery involved - mysterious key characters, unknown noises and people etc. ...read more.

The stories were written nearly 100 years apart, but still both follow a similar formula, although they have different plots, this is because it has been found to be effective and interesting to readers, and has worked in the past. Therefore it does not need to be changed. The tension created within both stories is very different, in 'The Red Room' the tension increases throughout the story and then dramatically drops towards the end. At the beginning a relatively low point of tension is shown and this is because the man is quite confident - "'I can assure you,' said I, 'that it will take a very tangible ghost to frighten me.'" But as the man becomes more frightened, the level of tension also increases. H.G. Wells achieves this by using a combination of long, complicated and descriptive sentences, with shorter ones to make the reader think more about what they are reading, and also read faster. One of these combinations is "'Steady on!' I said. 'These candles are wanted,' speaking with a half-hysterical facetiousness, and scratching away at a match the while for the mantle candlesticks". This is towards the height of tension and shortly after this, the tension drops right down to normal level - "I opened my eyes in daylight" The tension in 'Farthing House' fluctuates a lot; it rises and drops throughout the story, as many 20th century horror stories do. ...read more.

Ghost stories have been popular for a long time - as is shown by the fact that 'The Red Room' was written over 100 years ago. I think that this is because they use a formula to entice the reader into continuing to read, and this works, throughout the ages. Ghost stories are past from generation to generation, and the rules of writing can be changed to create new and interesting plots. Some elements of the first formula have stuck, which is why 'The Red Room' and 'Farthing House' are so similar, although written years apart. I think that they have stuck because they are a winning combination that attracts readers. Over time ghost stories have become more popular and some stories have also been shown as films or television programmes. This shows that they are still a popular part of culture and probably will continue to be in the future. Films and television programmes still often stick to the formula - setting and history, for example. However the visual images and plots differ. Farthing House is testimony to this, the setting is similar but the plot and purpose differs. "I was not afraid anymore, not now that I knew who she was and why she had been there, getting out of her bed in Cedar room, to go in search of her baby. ...read more.