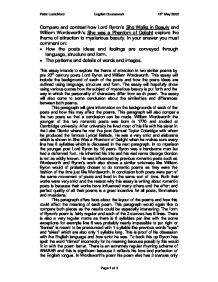 Compare and contrast how Lord Byron's She Walks in Beauty and William Wordsworth's She was a Phantom of Delight explore the theme of attraction to mysterious beauty. In your answer you must comment on:

Compare and contrast how Lord Byron's She Walks in Beauty and William Wordsworth's She was a Phantom of Delight explore the theme of attraction to mysterious beauty. In your answer you must comment on: * How the poets ideas and feelings are conveyed through language, structure and form. * The patterns and details of words and images. This essay intends to explore the theme of attraction in two similar poems by pre 20th century poets Lord Byron and William Wordsworth. This essay will include the background of each of the poets and how the poets ideas are outlined using language, structure and form. The essay will hopefully show using various quotes how the subject of mysterious beauty is put forth and the way in which the personality of characters differ from each poem. The essay will also come to some conclusion about the similarities and differences between both poems. This paragraph will give information on the backgrounds of each of the poets and how this may affect the poems. This paragraph will also compare the two poets so that a conclusion can be made. William Wordsworth the younger of the two romantic poets was born in 1770 and studied at Cambridge university. After university he lived most of his life with his sister in the Lake District where he met the poet Samuel Taylor Coleridge with whom he produced the famous Lyrical Ballads. ...read more.

Whereas Byron describes the woman's hair as a "raven tress." (line 9) Ravens are stereotypically black and perhaps evil whilst tress indicates a ringlet of hair. Therefore we can assume perhaps this woman has black hair and that she has an evil or mysterious side. Perhaps this paragraph has shown that the two poets ideas of beauty portrayed through hair differs and both poets play with physical images such as hair to illustrate their ideas. In conclusion this essay has shown that the two very similar romantic poets, Byron and Wordsworth have conveyed their ideas of mysterious beauty through poetry in many strict ways. The structure of their poems has shown how both poems are very regular and have a strict orderly rhyming scheme. The use of certain language features has given the poems a more in depth understanding and this has been shown in both the first lines and parts of the poems referring to beauty. The first lines have also grasped the reader by not giving away the whole meaning of the poem. The characters of both ladies in the poems have shown that perhaps one could have been a prostitute and the other maybe a ghost. Finally physical imagery in the poems has shown that both poets differ on how they picture beauty and this is shown through their poetry. Peter Luetchford English Coursework 15th May 2002 Page 1 of 3 ...read more.