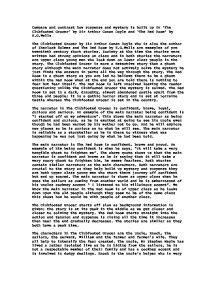 Compare and contrast how suspense and mystery is built up in 'The Clubfooted Grocer' by Sir Arthur Conan Doyle and 'The Red Room' by H.G.Wells.

Compare and contrast how suspense and mystery is built up in 'The Clubfooted Grocer' by Sir Arthur Conan Doyle and 'The Red Room' by H.G.Wells The Clubfooted Grocer by Sir Arthur Conan Doyle who is also the author of Sherlock Holmes and The Red Room by H.G.Wells are examples of pre twentieth century short stories. Society at the time the stories were written had strong opinions on class and in both stories the narrators are upper class young men who look down on lower class people in the story. The Clubfooted Grocer is more a detective story than a ghost story although the main narrator does not actively solve the mystery he just finds the answers in parts all the way through the story. The Red Room is a ghost story as you are led to believe there to be a ghost within the Red Room when at the end you are told there is nothing to fear but fear itself. ...read more.

The main narrator is shown as upper class when he sees the sailors as coming from another world and he is embarrassed of his uncles cockney accent " I listened to his villainous accent". We know the main narrator in The Red Room is of upper class as he looks down upon the old people although they seem to be of the same class this shows how he would be with people of another class. The Clubfooted Grocer starts off slow as background information is given; the story is at its peak in the middle as we get closer and closer to solving the mystery. The Red Room starts straight into the action and tension and suspense is rising all the time it increases then near the end gradually decreases. The stories are similar as they both have a peak time. The characters in The Clubfooted Grocer are the uncle, Enoch, the sailors, the servant, William and the farmer and farmer's wife. ...read more.

In The Red Room the author uses repetition has the words on "This night of all nights" and "It's in your own choosing" they use this to draw the readers attention and to make them think there really is something in the room. As the main narrator is walking through the house he describes it as 'chilly', 'echoing' the narrator says " A shadow seemed to sweep up over me" this makes the castle sound empty as if it had been for many years and as it is a scary story you are waiting for something to jump out from behind the shadows. The language featured in the Red Room is very descriptive, pre twentieth century language and adjectives. The Clubfooted Grocer draws close attention to people's description and accent to give us a good idea of what these people are like. The language featured is pre twentieth century language and adjectives. Language to describe the Moors . The similarities are they both use adjectives and pre twentieth language. The Clubfooted Grocer builds up most suspense has the moor is dark and you cannot see who or what is out there. ...read more.