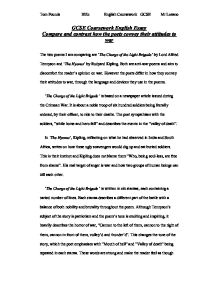 Compare and contrast how the poets convey their attitudes to war

GCSE Coursework English Essay Compare and contrast how the poets convey their attitudes to war The two poems I am comparing are 'The Charge of the Light Brigade' by Lord Alfred Tennyson and 'The Hyenas' by Rudyard Kipling. Both are anti-war poems and aim to discomfort the reader's opinion on war. However the poets differ in how they convey their attitudes to war, through the language and devices they use in the poems. 'The Charge of the Light Brigade' is based on a newspaper article issued during the Crimean War. It is about a noble troop of six hundred soldiers being literally ordered, by their officer, to ride to their deaths. The poet sympathises with the soldiers, "while horse and hero fell" and describes the events in the "valley of death". In 'The Hyenas', Kipling, reflecting on what he had observed in India and South Africa, writes on how these ugly scavengers would dig up and eat buried soldiers. This is their instinct and Kipling does not blame them "Who, being soul-less, are free from shame". His real target of anger is war and how two groups of human beings can kill each other. 'The Charge of the Light Brigade' is written in six stanzas, each containing a varied number of lines. Each stanza describes a different part of the battle with a balance of both nobility and brutality throughout the poem. ...read more.

Another example of repetition is at the beginning of certain lines the same word is repeated as in the line before. Such as "Theirs...Theirs" and "Flash'd...Flash'd". Again the same repetition happens at the end line of every stanza. "Rode the six hundred...Rode the six hundred". This emphasises the number of men lost in the battle and the number of noble men who were misled by their officer. This is shown in the fifth stanza in which the two ending lines, "Then they rode back, but not, Not the six hundred" show that many men have lost their lives in this battle. In addition 'The Hyenas' has also some repetition, but not as much. In the second stanza Kipling has repeated the word 'died'; "How he died and why he died". This emphasises the word death and that the war has killed so many. In 'The Charge of the Light Brigade', there is a rhyme scheme with three lines in each stanza rhyming together. There is another rhythm, continuing throughout the story; hoof beats of the horses in battle are heard with a series of words as the poem is read. This makes an impact on the tone of the story, as now the reader can hear the sounds of the battlefield. These sounds are made by the amount of syllables in each line. They are always around 6 syllables and certain lines are the same such as; "Rode the six hundred" and "Volley'd and thunder'd". ...read more.

In 'The Charge of the Light Brigade', after the fury of the charge towards the cannons, the final words are gentle and make you reflect on the scenes beforehand: "Then they rode back, but not, Not the six hundred". This has an impact on the reader as now he reflects on the battle and is grateful to those who have lost their lives for their country. The reader is also surprised at the bravery of the soldiers, even though they knew they would probably die. They knew it was the wrong decision, but they just kept riding and did not question the officer's decision. "Theirs not to make reply, theirs not to reason why, theirs but to do and die". This shows how brave and loyal the soldiers were, not to disobey the officer, even though they knew it was wrong. In conclusion the poets convey their attitudes towards war in different ways. Tennyson's main approach was to use many devices such as clusters of three and personification to give the reader an idea of how bad war was. Kipling, however, uses imagery to shame the reader, how they can fight and kill against their own species. They both successfully use these devices and their poems have become famous and well-known throughout the years. Both poets have an impact on the reader. This is the main objective of an anti-war poem, which are designed to make the reader turn against war. Word Count = 1814 Tom Pounds 10Zc English Coursework GCSE Mr Lozano ...read more.