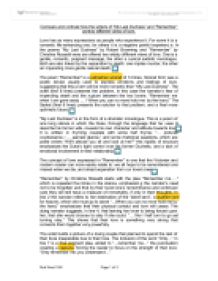 Compare and contrast how the writers of &quot;My Last Duchess&quot; and &quot;Remember&quot; portray different views of love

Compare and contrast how the writers of "My Last Duchess" and "Remember" portray different views of love. Love has as many expressions as people who experience it. For some it is a romantic life-enhancing one, for others it is a negative painful experience. In the poems "My Last Duchess" by Robert Browning and "Remember" by Christina Rossetti were are offered two widely different views of love. One is a gentle, romantic, poignant message, the other a cynical sadistic monologue. Both are also linked by the separation by death: one implies murder, the other an impending more gentle natural death. The poem "Remember" is a petrachan sonnet of 14 lines. Sonnet form was a poetic device usually used to express emotions and feelings of love, suggesting that this poem will be more romantic than "My Last Duchess". The octet (first 8 lines) presents the problem, in this case the narrator's fear of impending death and the rupture between the two lovers: "Remember me when I am gone away ... / When you can no more hold me by the hand." The Sestet (final 6 lines) ...read more.

as a contrast to the earlier appeal to surround himself in memories of his departed lover, the husband is instructed that if the memories make him upset then it would be better for him to forget, move on with his life and be happy. This shows some of the characteristics of romantic love that puts the needs and happiness of the other person first. "My Last Duchess" is constructed as a Duke having a dialogue both with an envoy and to himself. The purpose of the envoy's visit - to arrange a marriage, is only made clear in the final eight lines; the rest of the poem is a portrayal of the Duke's attitude to, and experience with, his former Duchess. The Duke refers to his former wife as "My Last Duchess", the possessive pronoun here giving us the first idea that her saw her as a possession and that she is only one in a line of past and future Duchesses. So possessive and controlling is her of her, even after death, that her has hidden her portrait behind a curtain: "... ...read more.

This rapid change in mood emphasizes the idea that the Duke is not a totally sane man. The poem ends with a reinforcement of the role of the marriage partner, that she is an object to be bought by him and sold by her father, as much his possession as his statue, which, ironically, shows subjugation. He doesn't his marriage partner as someone he shares love with, she is just something to make him look and feel powerful. The two poems highlight differences in relationships and how people show and share love. "Remember" is a tender, regretful message to a lover, an avowal that memories of love ca live after death and that true romantic love puts the other person first. "My Last Duchess", by contrast is a self - obsessed monologue of an arrogant and proud man who sees his wife as a possession, who should be grateful for his "love" which he sees not as an emotion, but as possessions, his noble name and a contract with her father. ?? ?? ?? ?? 08/05/2007 English Coursework Rob West 10W Page 1 of 3 ...read more.

This is a well informed, intelligent essay, which gives a strong insight into both poems and makes some interesting comparisons and contrasts between them. *****