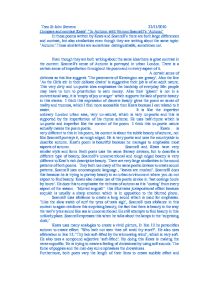 Compare and contrast Keat's 'To Autumn' and Vernon Scannell's 'Autumn'

Theo St John Stevens 22/11/2010 Compare and contrast Keats' 'To Autumn with Vernon Scannell's 'Autumn' In these poems written by Keats and Scannell's there are both large differences and contrast, but also similarities even though they are writing about the same topic: 'Autumn'.These similarities are sometimes distinguishable, sometimes not. Even though they are both writing about the same idea there is great contrast in the content. Scannell's sense of Autumn is portrayed in urban London. There is a certain sense of imperfection throughout his poem and in every aspect of it. A certain sense of dirtiness as this line suggests 'The pavements of Kensington are greasy'. Also the line 'As the Girls stir in their delicate chains' is suggestive their job is of an adult nature. This very dirty and un-poetic idea emphasises the hardship of everyday life: people may have to turn to prostitution to earn money. Also their 'gleam' is not in a conventional way, it is 'empty of joy or anger' which supports the lack of poetic beauty in this stanza. I think this expression of discrete beauty gives the poem an sense of reality and trueness, which I find more accessible then Keats because I can related to it easier. ...read more.

In Keats, examples of this imagery are: the 'fume of poppies', the olfactory, and 'gathering swallows twitter' the aural, as well as 'plump the hazel shells' the tactile. I think this effect in the poem Keats uses very well to bring out the richness of the season. Scannell also does this: 'The wind smells of burnt porridge' (olfactory). ' Their eyes are polished by the wind' (visual). So both poets actually use multi-sensuous imagery which creates an synaesthesia affect. Scannell does this because he is describing a different type of beauty. He is trying to show the discreet beauty of Urban London; how there is still beauty in the most unlikely place. This is how he describes autumnal beauty. The smell of burnt porridge is not usually beautiful and it is not at all conventional but there is a different type of beauty which Scannell is trying to portray. These un-poetic senesces I believe make the poem poetic. Keats uses multi-sensuous language because it helps to emphasize the rich and descriptive view of autumn. The perfect sense of natural beauty is expressed by the synaesthetic language. The pure beauty of autumn is expressed literally and (over)emphasised through hyperbolic language. 0. The poets use very different poetic forms, Scannell does not use full rhythm in his poem, as the majority of it is written in half rhyme. ...read more.

This is personal and reflective as at the time he is dying from tuberculosis and he knows that he will die soon. It is like autumn where life ends. You feel that his life is coming to an end like the end of autumn. But this sadness may also be to do with his recent brother's death from tuberculosis. The 'gnats mourn' could symbolise his mourning and pain from the loss of his brother or his pain of illness. Also the word 'bourn' which is from Hamlet, was used as an allusion to show that death is on the horizon, which may be symbolic and he may be contemplating his own death. 0. Scannell also likes autumn which is expressed in his tone. In his poem it is ironic because of the fact that in dirty urban London there still is surprising beauty.There is beauty in how the leaves are mushed into the gutter when you wouldn't expect them to be. It is a complete contrast to rural settings where most poets describe autumn. But this is the reason why Scannell favours autumn because even in the most unlikely place there still is mysterious beauty. How the car tyres sigh, is described very subtly and low-key. Not like Keat's over-descriptive hyperbolic language. This subtle beauty is the reason why Scannell favours autumn. 0. 0. 0. 0. 0. 0. 0. 0. 0. 0. 0. ...read more.