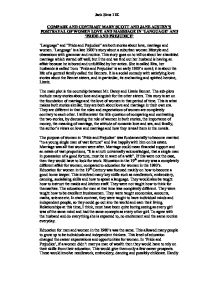 COMPARE AND CONTRAST MARY SCOTT AND JANE AUSTEN'S PORTRAYAL OF WOMEN LOVE AND MARRIAGE IN 'LANGUAGE' AND 'PRIDE AND PREJUDICE' 'Language" and "Pride and Prejudice" are both stories about love, marriage and women. 'Language' is a late 1900's story about a suburban woman lifestyle and obsessions with grammar and routine. This story goes on to tell us about her shambled marriage which started off well, but I the end we find out her husband is having an affair because he is bored and unfulfilled by her antics. She is called Rita, her husbands is called Tom. 'Pride and Prejudice' is an early 1800's novel; it is about the life of a genteel family called the Bennets. It is a social comedy with satisfying love stories about the Bennet sisters, and in particular, its enchanting and spirited heroine, Lizzie. The main plot is the courtship between Mr. Darcy and Lizzie Bennet. The sub-plots include many stories about love and anguish for the other sisters. This story is set on the foundation of marriage and the love of women in that period of time. This is what makes both stories similar, they are both about love and marriage in their own era. They are different in that the roles and expectations of women are completely contrary to each other. I will answer the title question of comparing and contrasting the two stories, by discussing the role of women in both stories, the importance of money, the meaning of marriage, the attitude of romantic love and sex, and finally, the author's views on love and marriage and how they reveal them in the novels. ...read more.

These women rely too heavily on financial support from either their families or husbands. This is due to their lack of education and if they did not have money they would have nothing. This is why marriage was so important in those times for women. They didn't have the intellect and skills to create a career out of anything, nor did they have any money of their own. They relied heavily and solely on the husband to provide. That is why in 'P and P', the wealthier you were the more attractive you became, and if you were good looking it was a bonus. Marriage was never entirely for love. This explains many peoples view on marriage in 'P and P'. This is the view on marriage in the case of such people as Charlotte Lucas, and Mr. Collins. They married each other for support and inheritance. Mrs. Bennet's attitude is that to get all of her daughters married off to men of vast fortune in order to better the family and for great living. On the contrary, Lydia Bennet's view to marriage is wholly different to that of other families. She ran away with a poor man for love and nothing else. This worries and upsets Mrs. Bennet, not because she ran away but because she believes that word would spread and every fine gentleman would not consider the Bennet sisters, due to their reputation. Marriage in the 20th Century is not that important in the sense of support and estates, yet some people still marry for this reason. ...read more.

It was the fact it was very unorthodox to do so in those times. Nobody of that class and stature did anything remotely obscene in the act of love. This is because to be seen as an orthodox and traditional family was a positive thing to be. This way people could expect only the best from you and your family, which would heighten ones reputation. It was not the law or rule to act as such, but it was what people expected and tradition to do so. Anything remote from the nucleus was obscene. This view is lighter in the time of 'Language", yet Tom's clandestine behaviour is what people believe to be immoral. People still do it, so it's not entirely astonishing, yet it is still looked down upon. Rita reacts to this event in an entirely unorthodox manner. She spray paints the walls of her neighbours houses with comments she thinks about Tom for doing this to her. She also goes into denial and blanks him out of her mind. Rita's response shows us that 20th Century views on sexually explicit behaviour are common enough for her neighbours not to really care and come out to help her in times of distress and insecurity, and for Rita to consider doing these acts of vandalism. In 'P and P', the woman would have gone directly back to her family and cried. The man would have a foul reputation but nothing more would be done. This shows us the extremes between the two stories and peoples reactions at the time. Jack Sims 11K ...read more.