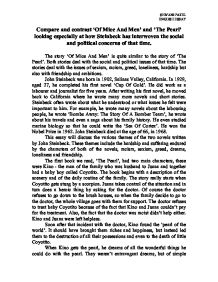 Compare and contrast 'Of Mice And Men' and 'The Pearl' looking especially at how Steinbeck has interwoven the social and political concerns of that time.

Compare and contrast 'Of Mice And Men' and 'The Pearl' looking especially at how Steinbeck has interwoven the social and political concerns of that time. The story 'Of Mice And Men' is quite similar to the story of 'The Pearl'. Both stories deal with the social and political issues of that time. The stories deal with the issues of sexism, racism, greed, loneliness, hardship but also with friendship and ambitions. John Steinbeck was born in 1902, Salinas Valley, California. In 1929, aged 27, he completed his first novel 'Cup Of Gold'. He did work as a labourer and journalist for five years. After writing his first novel, he moved back to California where he wrote many more novels and short stories. Steinbeck often wrote about what he understood or what issues he felt were important to him. For example, he wrote many novels about the labouring people, he wrote 'Bombs Away: The Story Of A Bomber Team', he wrote about his travels and even a saga about his family history. He even studied marine biology so that he could write the 'Sea Of Cortez'. He won the Nobel Prize in 1962. John Steinbeck died at the age of 66, in 1968. This essay will discuss the various themes of the two novels written by John Steinbeck. These themes include the hardship and suffering endured by the characters of both of the novels, racism, sexism, greed, dreams, loneliness and friendship. ...read more.

There is a description of Kino and Juana, in the story that the beggars in the city had made. They saw Juana's old skirt, 'the tears in her shawl', the beggars even saw through the age of Kino's blanket and they saw the amount of times his clothes had been washed was a lot and so the beggars, who were 'great experts in financial analysis' came to the conclusion that Kino and Juana were 'poverty people'. In the beginning of the story, the family seem to be happy and comfortable. Steinbeck describes their mourning routine s though Kino and Juana didn't mind being poor, but we learn that isn't true. When Coyotito is stung by the scorpion, Juana and Kino feel helpless as they cannot afford to treat their son. To make the situation worse, Coyotito is their first born son, and so it is very important that they are able to provide adequate medical treatment for him. When Juana has to make do with the seaweed poultice, we learn that the traditional methods of treating a scorpion bite were frowned upon by Juana, as the remedy lacked the doctors 'authority' just because it was simple and it didn't cost a penny. Not only that but they couldn't afford to get married even. Lennie and George were very poor too. On average they got 50 dollars a month, but they got accommodation and food. The migrant ranch workers, tended to live in filth conditions and many had body lice. ...read more.

Lennie was just like a child, and children cannot have adult conversations. This is far better than the others on the ranch. Crooks isn't allowed to make friends with others because he isn't anything more than just a 'nigger' to them. Candy too, is discriminated against because of his disability and his old age. The shooting of Candy's dog was a fine example of how if something isn't of any use any more - then just kill it. I think Steinbeck tried to get his readers to be more aware and understanding towards the underprivileged. Steinbeck understood these people, so he wrote about them. There is a hidden moral here to be learnt, that I feel Steinbeck was trying to give across. I believe Steinbeck was saying that in those times and even now, money doesn't always equal to prosperity. Take for example, the doctor, he was a wealthy man in 'The Pearl', but he wasn't actually happy and content. Kino and Juana were by far better off than the doctor, as they had love, not money, even though money can seem to solve problems. As for George and Lennie, they seemed to be happy enough in their dreams and ambitions, far happier than Curley, who had inherited his father's wealth. Curley could have even been jealous of the ranch men and their freedom. Steinbeck showed that none of his characters, in either book, were fully content with their situation. This could be saying something about the nature of humans, how the grass is always greener on the other side, and how nobody is going to fully happy with wealth. SHIVANI PATEL ENGLISH ESSAY ...read more.