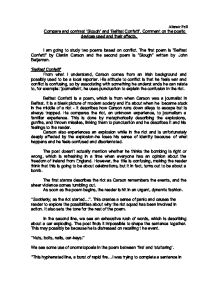 Compare and contrast 'Slough' and 'Belfast Confetti' - Comment on the poetic devices used and their effects.

Compare and contrast 'Slough' and 'Belfast Confetti'. Comment on the poetic devices used and their effects. I am going to study two poems based on conflict. The first poem is "Belfast Confetti" by Ciar�n Carson and the second poem is "Slough" written by John Betjeman. 'Belfast Confetti' From what I understand, Carson comes from an Irish background and possibly used to be a local reporter. His attitude to conflict is that he feels war and conflict is confusing, so by associating with something he understands he can relate to, for example: 'journalism', he uses punctuation to explain the confusion in the riot. Belfast Confetti is a poem, which is from when Carson was a journalist in Belfast. It is a bleak picture of modern society and it's about when he became stuck in the middle of a riot - It describes how Carson runs down alleys to escape but is always trapped. He compares the riot, an unknown experience, to journalism a familiar experience. This is done by metaphorically describing the explosions, gunfire, and thrown missiles, linking them to punctuation and he describes it and his feelings to the reader. Carson also experiences an explosion while in the riot and is unfortunately deeply affected by the explosion-he loses his sense of identity because of what happens and he feels confused and disorientated. ...read more.

''Every move is punctuated. Crimea Street. Dead end again'' In the second stanza, in the second last line, the poet inserts an empty line. He has done this to emphasise his disorientation and confusion from the bomb/explosion. It is also rather odd that the poet has used question marks in the poem, as a good poem shouldn't need to have unanswered questions at the end. These specific question marks are used for effect and also mean that he doesn't have to formulate an opinion about what's happening, an opinion that could upset those around him. They also allow the reader to make up their own opinion. ''My name? Where am I coming from? Where am I going?'' By saying "Saracen, Kremlin-2 mesh. Makrolon face-shields. Walkie-talkies", he gives the reader an inhuman picture of the army by depicting it as a collection of military equipment, intimidating in its coldness. The actual sound of the line too with the predominant consonant "k" and heavily fragmented lines contribute to this effect. Also, I think that when Carson says "Balaclava, Raglan, Inkerman, Odessa Street- why can't I escape?" he is unsure of an area that he knows because of everything that is happening. This maybe because the memories of the incident haunt the writer as he struggles to explain the events. ...read more.

In the first stanza, the poet has explained that he feels the cramped housing is suffocating the earth beneath. However, the poem does end with a sense of calmness and relief. ''The earth exhales''. Here, the poem ends with a clear sense of calmness as if the poet imagines bombs have gone off and the earth can breathe again, free from the disgusting town that once stood on it. The poem Slough uses negative imagery throughout the poem. Repeating the word 'tinned' in the second verse conveys the idea that the people in Slough are eating artificial food and have consequently become artificial themselves. This is supported in stanza nine by the use of words to convey feeling of artificiality 'frizz out peroxide hair, and dry it in synthetic air'. In verses six to nine the poet paints a picture of innocent but useless young men, conveying the idea that if these men are the future of Slough, then Slough has no future. 'Daren't look up and see the stars, but belch instead'. Perhaps the poet feels that Slough has no future, it may as well be bombed. Slough is written as a rhyming poem in verses of four lines. It has a regular rhyme scheme, which is constant and unwavering attitude for Slough. The short rhyming style supports the cynical humour of the poem. Alistair Pell ...read more.