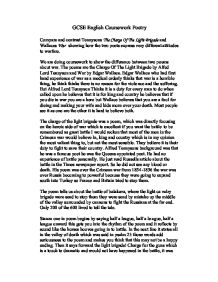 Compare and contrast Tennysons The Charge Of The Light Brigade and Wallaces War showing how the two poets express very different attitudes to warfare.

GCSE English Coursework Poetry Compare and contrast Tennysons The Charge Of The Light Brigade and Wallaces War showing how the two poets express very different attitudes to warfare. We are doing coursework to show the difference between two poems about war. The poems are the Charge Of The Light Brigade by Alfed Lord Tennyson and War by Edgar Wallace. Edgar Wallace who had first hand experience of war as a medical orderly thinks that war is a horrible thing, he think thinks there is no reason for the violence and the suffering. But Alfred Lord Tennyson Thinks it is a duty for every man to do when called upon he believes that it is for king and country he believes that if you die in war you are a hero but Wallace believes that you are a fool for dieing and making your wife and kids morn over your death. Most people see it as one are the other it is hard to believe both. The charge of the light brigade was a poem, which was directly focusing on the heroic side of war which is excellent if you want the battle to be remembered as great battle I would ...read more.

This bit was not in the times it was just made up. Then at the end it said rode the 600, which repeats its self for a while. The first sentence in stanza two was forward the light brigade, which just was repeating the rousing cry from the first stanza. After that it said, was there a man dismayed not though a soldier knew some one had blundered, theirs not to make reply, there's not to reason why, there's but to do and die all this means that the men knew somebody made a mistake but they knew they should not question their officers they just done what they are told they would have had death and glory in their heads when they were going to it. He made the officers better of than they were. Tennyson thought he had read that the officers blundered in Russells report but he didn't Russell must have implied it though the text. Then it repeats both into the valley of death and rode the 600 which carries on the rhythm of the poem and it reflects the sound of hooves again. ...read more.

Then on the second last line it says then they rode back, then there was a dramatic pause, but not the six hundred so it has changed from rode the 600 to but not the 600. Stanza 5 there is cannons surrounded them again and the poem says cannon to the right of them, cannon to the left of them, cannon to the left of them, cannon behind them they were facing the same force on the retreat as on the advance, cannon to is making it sound like people are firing at them. Then half way though it, it says stormed with a shot and shell, white horse down and hero fell, white horse down and hero fell is a line from the olden days. Then it goes on to say they had fought so well, puts all the focus on survivors not those who were needlessly killed. Then it talks about the jaws of death again, then it says left of the 600. Then on the last stanza it says when will their glory fade which is never it was rhetorical it was just main trying to focus on the honour not the death Then on the last line it says noble 600 which immortalises them forever and says we must remember the noble sarifice. ...read more.