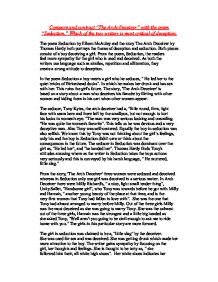 Compare and contrast &quot;The Arch-Deceiver&quot; with the poem &quot;Seduction.&quot; Which of the two writers is most critical of deception.

Compare and contrast "The Arch-Deceiver" with the poem "Seduction." Which of the two writers is most critical of deception. The poem Seduction by Eileen McAuley and the story The Arch Deceiver by Thomas Hardy both portrays the theme of deception and seduction. Both pieces consist of a boy deceiving a girl. From the poem, Seduction, the readers feel more sympathy for the girl who is used and deceived. As both the writers use language such as similes, repetition and alliteration, they create a strong attitude to deception. In the poem Seduction a boy meets a girl who he seduces, " He led her to the quiet bricks of Birkenhead docks". In which he makes her drunk and has sex with her. This ruins the girl's future. The story, 'The Arch Deceiver' is based on a story about a man who deceives his fianc�e by flirting with other women and hiding them in his cart when other women appear. The seducer, Tony Kytes, the arch deceiver had a, "little round, firm, tight face with seam here and there left by the smallpox, but not enough to hurt his looks in women's eye. ...read more.

The similarity between both texts is that the writers, Thomas Hardy and Eileen McAuley both give lots of sympathy towards the girls. The difference is that Tony Kytes deceives three women but in a amusing matter as he hides them one by one in the back of the cart whereas the boy in Seduction deceives one particular girl and the consequences are tragic, as, "she discovered she was 3 months gone". This incident made her life miserable as she had a bright future. The repetition in the poem emphasizes the girls despair, "truly, truly frightened." The alliteration, "fashion features" shows us the deceptively glamorous nature of teenage magazines, "not really glamorous meeting people from the opposite sex". In ' The Arch Deceiver', Tony Kytes spins a web of lies, however in Seduction the boy doesn't actually make promises. This means that Tony Kytes is more deceptive. The writer and the narrator's attitudes to characters are both different. From Arch Deceiver the carrier does not criticize Tony in any bad way, "I shall never forget Tony's face". He also describes him as a likeable fella. From Seduction the writer creates sympathy for the girl as, "she sobbed in the cool locked darkness of her room". ...read more.

Tony kytes and Milly are criticized by each other as Tony flirts with other girls, whilst engaged to Milly and Milly is criticized as she is the one deceived by her own future husband. The Arch Deceiver was set during the 19th century, whereas Seduction was set during the 1980's in Liverpool. During the period of time, 1900's there was a very strict moral about deceiving and in those day's, men had to ask women to marry. If it was the other way round then it was meant to be a disgrace and awkward. During the 1980's you needed good GCSE's grades to be very certain of your future life and if pregnant before marriage you were supplied with bad attitudes and a very negative reputation. From the poem and story of deceiving one another, Seduction is the most critical of deception. This is because the writer, Eileen McAuley takes deception very seriously as the boy uses the girl to have sex, which then makes her pregnant. However Thomas Hardy takes deception very amusing towards Tony Kytes as he unintelligently hides the girls one by one in the kart. Tone, content, language and symbolism help us to see who is the most critical towards deception. BY JULAN SHAH ...read more.