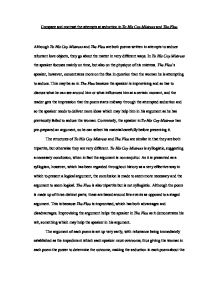 Compare and contrast the attempts at seduction in To His Coy Mistress and The Flea Although To His Coy Mistress and The Flea are both poems written in attempts to seduce reluctant love objects, they go about the matter in very different ways. In To His Coy Mistress the speaker focuses mainly on time, but also on the physique of his mistress. The Flea's speaker, however, concentrates more on the flea in question than the woman he is attempting to seduce. This may be so in The Flea because the speaker is improvising and so has to discuss what he can see around him or what influences him at a certain moment, and the reader gets the impression that the poem starts midway through the attempted seduction and so the speaker needs to deliver more ideas which may help him in his argument as he has previously failed to seduce the woman. Conversely, the speaker in To His Coy Mistress has pre-prepared an argument, so he can select his material carefully before presenting it. The structures of To His Coy Mistress and The Flea are similar in that they are both tripartite, but otherwise they are very different. To His Coy Mistress is syllogistic, suggesting a necessary conclusion, when in fact the argument is non-sequitur. As it is presented as a syllogism, however, which has been regarded throughout history as a very effective way in which to present a logical argument, the conclusion is made to seem more necessary and the argument to seem logical. ...read more.

The description of this perfect world brings to light the fact that the speaker and his mistress do not live in a perfect world and so the imperfect world in which they do live will have to be sufficient, which insinuates the speaker's overall argument that, as they are not in a perfect world and they do not have eternity during which to be together, they should "tear [their] pleasures with rough strife" (43) while they are able. The second stanza of To His Coy Mistress is a more pragmatic stanza than the first as the speaker is addressing the present and the truth as opposed to lingering on idealism. The second stanza also presents the second premise of the syllogism, leading up to the deductive conclusion. This stanza focuses on the destructive power of time, thus making honour and virginity pointless. Time is described as being persistent, destructive and fast, with the speaker claiming to "always hear/Time's winged chariot hurrying near" (21-2). Time is usually described as being either winged or in a chariot, alluding to the Greek god of time, but is not usually associated with both of those things at once, so the speed of time is emphasised. The speaker then goes on to address what would happen were time to destroy his mistress before he had taken her virginity, which is the worms trying "that long preserved virginity" (28) ...read more.

The speaker even admits to the woman that she has triumphed over him, but then he invents a way of reversing the situation back so that it supports his argument, showing his wit and quick thinking which has been used throughout the poem including the analogy on which the poem is based; the speaker also claims that he has dropped his argument and agrees with the woman that the situation with the flea was insignificant. He therefore invokes that she should also see her argument, that she must keep her honour, as insignificant because, as the flea is analogous to sex, if the flea is insignificant then so is the act of sex. Both To His Coy Mistress and The Flea end optimistically in high register, having attempted seduction by force of will. In To His Coy Mistress this is because the speaker believes that, because of his use of a syllogism, his conclusion is necessary and he has won. The reader, on the other hand, sees the argument that is presented in To His Coy Mistress and inductive as opposed to deductive, and so is not so convinced of success. The Flea however ends with the speaker proving that the woman he is trying to seduce may as well give up her argument as, due to his good wit, he will be able to overcome any argument she may present him with, which, to the reader, seems the more triumphant of the two poems. ?? ?? ?? ?? ...read more.