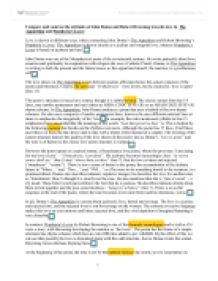 Compare and contrast the attitudes of John Donne and Robert Browning towards love in The Apparition and Porphyria's Lover Love is shown in different ways, when contrasting John Donne's The Apparition and Robert Browning's Porphyria's Lover. The Apparition is shown clearly as a jealous and vengeful love, whereas Porphyria's Lover is based on jealousy and lust. John Donne was one of the Metaphysical poets of the seventeenth century. He wrote primarily about love, emotion and spirituality in conjunction with religion (he was a Catholic Priest). Donne, in The Apparition is writing in both the present and the future tenses, as the apparition himself, the narrator, is a posthumous self. The love shown in The Apparition is torn between jealous affection (hence the actual existence of the poem) and bitterness. Clearly, the poet and "O Murdresse" were lovers, but he claims his 'love is spent' (line 15). The poem's structure is based on a sonnet, though it is subtly twisted. The classic sonnet form has 14 lines, uses iambic pentameter and uses either an ABBA CDDC EFFE GG or an ABAB CDCD EFEF GG rhyme scheme. In The Apparition, John Donne produces a poem that uses a hybrid of the two rhyme schemes. He also uses a majority of iambic pentameter lines; however he uses different metrical lines at times to emphasize the irregularity of his 'love'. ...read more.

The poem has the frame of a simple alternate line rhyme scheme which has an extra fifth line added to jar: ABABB. By the effect of this we can see that possibly the love is disjointed along with this odd structure. Just as Donne twists the sonnet, Browning twists alternate rhyming lines. At the beginning of the poem, the tone is set by the pathetic fallacy: the storm, yet we concentrate on what is happening in the house (the house makes it seem like a sanctuary from the weather). Browning personifies the wind and lake - "The rain set early in to-night, the sullen wind was soon awake". But when the stage turns to the cottage, with the log fire, the tone is somewhat warmer. When Porphyria enters he states that "she shut out the cold and the storm" and so the room was even warmer/brighter when she came in. "And, last, she sat down by my side And called me. When..." (line 14/15) - this is strong use of a caesura (full stop) and suddenly halts the rhythm of the poem. We wait for the narrator's answer along with Porphyria - it never comes. The affect of caesuras on the fluidity of the rhythm scheme is another addition to the warped structure of the poem. In the first half of the poem the narrator is passive, and lets Porphyria be the 'dominant' character, but in the second half, the narrator suddenly becomes active, with Porphyria passive. ...read more.

At line 52, the narrator uses an patronising tone "Her smiling little rosy head" as if he was saying she wanted to die in this moment of pure, perfect love. Porphyria's Lover relates how, by strangling Porphyria with her own hair, the lover seized and preserved the moment of perfect intimacy when, pure and good, Porphyria left the world she could not forego for his sake, and came to him, for once conquered by her love. An inherent misgiving as to his action is intimated in the closing line of the poem. "God has not said a word"- he thinks that he is God and as he, the narrator, has said nothing in this poem, it is a rather comically smug end to a sick, twisted love poem. Compared to Donne's The Apparition, Porphyria's Lover is not about revenge, yet there is still possessiveness for the lover: in Porphyria's Lover, as she is married and she is not willing to get a divorce. These are both very physically intimate poems, however, The Apparition develops more of a bitter love. They are both amoral poems, with Donne's intentions and Browning's necrophiliac undertones. The love in The Apparition is a different love to Porphyria's Lover, as it is a sad and bitter ("spent") love, with a disappointed lover, whereas Porphyria's Lover moves from a melancholic to a fulfilled love, with a dominant, if twisted and amoral lover. ?? ?? ?? ?? Edward Gooch ...read more.

This is a very good essay, showing an excellent understanding of both texts as well as a strong knowledge of poetry techniques. With more comparison/contrast between the poems, this would have achieved a top rating. ****