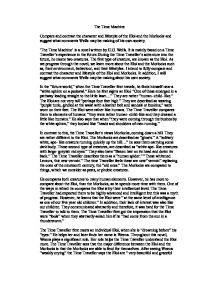 Compare and contrast the character and lifestyle of the Eloi and the Morlocks and suggest what comments Wells may be making of his own society.

Life for the Eloi, is less challenging and everything is ' given to them on their plates.' The second reason why the Eloi are frail is because they have a strict vegetarian diet, consisting of fruit. However, the Morlocks are very different. They are much bigger and stronger. The Time Traveller finds the Morlocks are "carnivores." The Eloi live in a communal society. Everything is equal and there is no hierarchy and no leader. Each Eloi eat the same food and dress in the same way. This is why the Time Traveller suggests that the future world is alike, as you cannot differentiate between "the sexes." The Eloi are naturally selected and they adapt well to their environment. The Time Traveller also finds that although the Eloi seem to live in a utopian society, full of peace and equality Here they are rather opposite to the Morlocks. The Morlocks live in a more challenging environment. They are strong labourers and they work and live "underground," unlike the Eloi, they hate light as they adapt well to their dark environment. Both the Eloi and the Morlocks live in completely different environments. The Eloi live in a "richer" environment than the Morlocks. ...read more.

From this, he learns that his own society is too divided the rich and poor division is too great. The Time Traveller points out that in the nineteenth century the rich people tend to live in the "prettier country" and tend to retain good environment for themselves. However, the workers put underground do not see light. The Time Traveller feels if the tendency of "the exclusive tendency of richer people" continues the workers or poorer people will change and become "underground" species like the Morlocks. The class division results the species division in the future. His point of this is a warning that if classes are so unequal or divided then it spells disaster for human kind. He also learns that their, the Victorians and himself, belief in progress is false. He sees and feels that human life does not progress or he sees in the dystopian future world. The Time Traveller has enough knowledge of the future world to compare and contrast the future creatures. He is able to compare their lifestyles and their appearance, most of all he can compare them to human elements. He introduces two theories, which he finds are false. He is also able to comment on the future world after seeing what is happening in his own society. He suggests that his society is vastly causing the division and the effects of the future. ...read more.