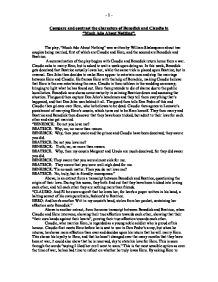 Compare and contrast the characters of Benedick and Claudio in

Compare and contrast the characters of Benedick and Claudio in "Much Ado About Nothing". The play, "Much Ado About Nothing" was written by William Shakespeare about two couples being married, first of which are Claudio and Hero, and the second are Benedick and Beatrice. A summarization of the play begins with Claudio and Benedick return home from a war. Claudio asks to marry Hero, but is asked to wait a week upon doing so. In this week, Benedick gets deceived that Beatrice actually loves her, while the same trick is placed upon Beatrice, but in reversal. Don John then decides to make Hero appear to entertain men and stop the marriage between Hero and Claudio. He frames Hero with the help of Borachio, making Claudio believe that Hero is the one entertaining the man. Claudio is then ruthless in the wedding ceremony, bringing to light what he has found out. Hero then pretends to die of shame due to the public humiliation. Benedick now shows some maturity in calming Beatrice down and assessing the situation. The guard then capture Don John's henchmen and they tell them everything that's happened, and that Don John was behind it all. The guard then tells Don Pedro of this and Claudio then grieves over Hero, who he believes to be dead. Claudio then agrees to Leonato's punishment of marrying Hero's cousin, which turns out to be Hero herself. They then marry and Beatrice and Benedick then discover that they have been tricked, but admit to their love for each other and also get married. "BENEDICK: Do not you love me? BEATRICE: Why, no; no more than reason. BENEDICK: Why, then your uncle and the prince and Claudio have been deceived; they swore you did. BEATRICE: Do not you love me? BENEDICK: Troth, no; no more than reason. BEATRICE: Why, then my cousin Margaret and Ursula are much deceived; for they did swear you did. ...read more.

This leads Claudio to believe that the prince is going against his deal, which he made with him earlier. It is only until he confronts Don Pedro, that he realises he was doing what they agreed upon all the time. Don John also says "friendship is constant in all other things save in the office and affairs of love." This leads Claudio to believe that friends will lie to each other as long as they are in love and someone's in the way. Benedick has a very cynical attitude towards all women, especially Beatrice. He has a negative view on which he bases all women on. For example, "...he shall never make me such a fool. One woman is fair, yet I am well; another is wise, yet I am well, another virtuous, yet I am well. But till all graces be in one woman, one woman shall not come in my grace." This shows how he describes the chances of him getting married are slim, and him to find a woman which is fair, wise and virtuous all at once, is even slimmer. This demonstrates his arrogance, as he thinks that he is superior to all women, including Beatrice. He begins the play by saying "surely I am to be loved of all women apart from you." This shows how all women regard Benedick as a noble and handsome man, but Beatrice's wit sees through Benedicks nobleness and honour and finds him a man to argue and fight. This gives Benedick a negative view to all women, but all, decides that Beatrice is not someone to be taken lightly, as she has equal wit to him. Benedick finds Beatrice highly insultive, and finds that her words hurt, unlike other people's remarks. This shown through the words "She speaks poniards, and every word stabs. If her breath were as terrible as her terminations, there were no living near her; she would infect the North Star." ...read more.

This shows how sensitive and sad Claudio is as he realises that his true love has been dashed away by Don Pedros' "bastard brother." In turn, he agrees instantly to Leonato's punishment, without thinking twice of questioning the appearance of Hero's cousin, and whether he would actually love her, just because Leonato told him to marry her. By this, Claudio learns that he shouldn't be so quick to judge, and that not all things appear what they really are. He is ecstatic to find that his mistake wasn't permanent and married Hero. In the play "Much Ado About Nothing", there is a lot of lies and deceit corrupting both of the young couples and interfering with their love. I found that many things aren't what they appear to be in the fact that Claudio slanders Hero on false accusations, and that Don John shouldn't be trusted as he says "the prince woos for himself" even though Don Pedro and Claudio had agreed upon it themselves earlier. I find that in the play Claudio and Benedick are two extremely different characters at the beginning of the play, as Claudio is regarded as a more serious, romantic figure, while Benedick is more of a "jester". During the course of the play, Benedick alters to become more serious and romantic himself, even though he has sworn against it. I find that as the situation has become more serious, Benedick has matured and doesn't slander women for who they are, but more for what they do. Even though Benedick has matured, he is still the main source of the humour in the play. When Don John flees to Messina, he leaves a trail of destruction behind him. His fleeing also shows him as a coward, trying to avoid the chaos he has created. It is only until he is captured and re-confronted with Benedick, he realises the seriousness of the situation he has created. ?? ?? ?? ?? - 1 - ...read more.