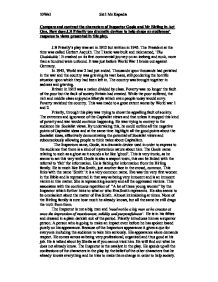 Compare and contrast the characters of Inspector Goole and Mr Birling in Act One. How does J.B Priestly use dramatic devices to help shape an audiences' response to views presented in this play.

Compare and contrast the characters of Inspector Goole and Mr Birling in Act One. How does J.B Priestly use dramatic devices to help shape an audiences' response to views presented in this play. J.B Priestly's play was set in 1912 but written in 1945. The President at the time was called Herbert Asquith. The Titanic was built and nicknamed, 'The Unsinkable'. It crashed on its first commercial journey on an iceberg and sunk, more than a hundred were unfound. It was just before World War 1 broke out against Germany. In 1945, World war 2 had just ended. Thousands upon thousands had perished in the war and the country was grieving its vast loses, still pondering the horrific situation upon which they had been left in. The country was brought together in sadness and grieving. Britain in 1912 was a nation divided by class. Poverty was no longer the fault of the poor but the fault of society Britain had created. While the poor suffered, the rich and middle class enjoyed a lifestyle which even people today would envy. Poverty ravished the country. This was made to a great extent worse by World war 1 and 2. Priestly, through this play was trying to show the appalling fault of society. The extremes and ignorance of the Capitalist views and that unless it stopped this kind of poverty and war would continue happening. He was trying to convey to the audience his Socialist views. By undertaking this, he could outline all the negative points of Capitalist ideas and at the same time highlight all the good points about the Socialist ideas, effectively demonstrating the potential of Socialist views and subconsciously allowing people to think twice about Capitalism. The Inspectors name, Goole, is a dramatic device used in order to express to the audience that there is a kind of mysterious nature about him. The Goole name relating to such as a ghost as it sounds a lot like 'ghoul'. ...read more.

There'll be peace and prosperity and rapid progress everywhere." In 1940, five years before this book was written, World War 2 was just beginning. There is no peace and prosperity and 'rapid progress.' Ironically every view he has is known to the audience to be false. Mr Birling has immense anticipation about what the future holds for him as this also effects his own business. This irony that is shown has the effect of making the audience ignore Mr Birling and his ideologies. Arthur Birling endeavours to keep labour costs down. "It is my duty to keep labour costs down, and if I'd agreed to this demand for a new rate we would have added about 12% to our labour costs." This shows he is a 'hard headed' business man and that the only thing he is interested in is his business and money. We can see by this that Priestly obviously very anti-Capitalist. He opposes all that Mr Birling has to say and rejects all Capitalist views that are put his way. The Inspector feels that the Birling's are all responsible for the death of Eva Smith. He keeps relating back to the pain and suffering Eva Smith endured and used guilt as a major part of trying to get the Birling's to feel responsible for the death of Eva Smith. He says various things to Sheila and Mr Birling in act1 to demonstrate what he thinks and who he feels is responsible for the suicide of Eva Smith. The Inspector states after Mr Birling says that Sheila and the rest can't be much help "The girls dead though" Sheila replies "...You talk as if we were responsible." He also disagrees with Mr Birling's assumption that his discharge of her nearly 18 months ago had nothing to do with Eva Smiths suicide, "Obviously it has nothing to do with the wretched girls suicide" " No, sir. ...read more.

The contrast between Mr Birling and the Inspector is very significant throughout the play and plays a major role in helping the play to achieve the moral values it benefits from. Hidden meanings and messages are scattered during the play and Priestly does very well to get them all across to the audience. Dramatic devices are a very important part of the play and Priestly does very well to manipulate the audiences response. The audience will expectantly leave the play with the Socialist views and think that the Capitalist views are immoral. Priestly succeeds in this by slyly using the dramatic devices to make the disadvantages of Capitalism stand out. At no point was there a dramatic device which highlight a bad point of Socialism. Only the good points would be picked up on which makes the play extremely effective at the task Priestly set it to. The Inspector is the embodiment of Priestly's views. Priestly is very successful in making the Inspector very ominous and something not to mess with but take very seriously. Also the fact that the Inspector is a fake and no-one knows who he is and why he did this to the Birling family, conveys yet more morals, it shows that this person was trying to do what is right and for some reason was sent there to help the Birlings and Croft to see their faults in life so that it can stop. The Inspector is the embodiment of Priestly's views, because of this, the Inspector is very successful in what he was meant to achieve as Priestly wrote him that way in order to convey socialism to his audience. His views were also very successful because of the achievement of the Inspector in the play. As we live our lives, people enter it and leave it just as we have entered their lives. Some just come and go, but some leave footprints on our hearts and they shall be with us forever, our life is shaped by the people we meet, our friends, enemies, teachers or relatives, "We do not live alone". 10Wa1 Set1 Ms Kapadia ...read more.