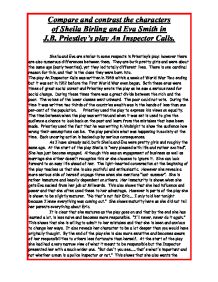 Compare and contrast the characters of Sheila Birling and Eva Smith in J.B. Priestley's play An Inspector Calls.

Compare and contrast the characters of Sheila Birling and Eva Smith in J.B. Priestley's play An Inspector Calls. Sheila and Eva are similar in some respects in Priestley's play; however there are also numerous differences between them. They are both pretty girls and were about the same age (early twenties), yet they led totally different lives. There is one cardinal reason for this, and that is the class they were born into. The play An Inspector Calls was written in 1945 within a week of World War Two ending but it was set in 1912 before the First World War even began. Both these eras were times of great social unrest and Priestley wrote the play as he saw a serious need for social change. During these times there was a great divide between the rich and the poor. The voices of the lower classes went unheard. The poor could not vote. During the time it was written two thirds of the countries wealth was in the hands of less than one per-cent of the population. Priestley used the play to express his views on equality. The time between when the play was written and when it was set is used to give the audience a chance to look back on the past and learn from the mistakes that have been made. Priestley used the fact that he was writing in hindsight to show the audience how wrong their assumptions can be. ...read more.

Priestley intends to educate the audience through the way the Birling's actions, and Gerald's, contributed to the death of Eva Smith. He wants people to learn a lesson from the play about their responsibility towards other people. Arthur Birling is the sort of person the play warns against. He represents exactly the opposite of what Priestley believes in. Priestley makes him seem foolish. At the beginning of the play Mr. Birling makes a number of confident predictions which the audience know are wrong. A good example of this is the Titanic. "Unsinkable, absolutely unsinkable." This is what he said about the Titanic. The audience however knows that the Titanic did sink and that therefore Mr. Birling is gravely wrong. As he made the predictions with such confidence he seems foolish because of his incorrectness. The fact that the Titanic is used is interesting as that represents the way different classes are treated. The higher-class people were rescued from the Titanic while the lower class workers were left to drown. The Inspector however has the same views as Priestley, and also makes a prediction during his final speech near the conclusion of the play. He says that if people do not change then blood and fire and anguish will be the result. This is a correct prediction as it refers to World War One and World War Two. Priesley makes the Inspector seem prophetic and mighty. "He is not a large man, but creates at once an impression of massiveness." ...read more.

Eva is extremely unusual for a main character in that she never appears on stage. An actor playing Sheila however would have a very difficult job because of the way her character changes in the play. If you look at the plays dramatical high points and when the characters of Eva and Sheila generate the most excitement and interest you notice a difference. The interest in Eva peaks right at the start of the play when you realise that she is dead. The stimulus her character provides to the audience stays quite high and peaks a few more times during the middle of the play before completely petering out in Act three. The interest in Sheila is a lot less consistent and has many high points and low points. Sheila is rather uninvolved in the dramatical high points at the beginning of the play but creates excitement and interest when she runs out on about page twenty-two. This leaves the audience in suspense as they do not know the reason for her swift departure. It rises again with the end of Act one when she realises that the Inspector knows everything and when she confronts Gerald. The tension rises again at the end of Act two when it dawns on her, but not her mother, that Eric was the father of the child. She becomes more involved after the Inspector leaves. She is trying to teach the other characters the errors in their ways. The excitement her character produces descends towards the end of Act three when they get a call from the chief of police right at the end of the play. ...read more.