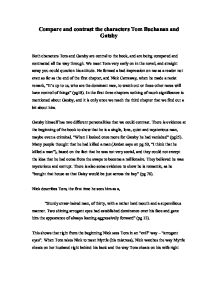 Compare and contrast the characters Tom Buchanan and Gatsby.

Compare and contrast the characters Tom Buchanan and Gatsby Both characters Tom and Gatsby are central to the book, and are being compared and contrasted all the way through. We meet Tom very early on in the novel, and straight away you could question his attitude. He formed a bad impression on me as a reader not even as far as the end of the first chapter, and Nick Carraway, when he made a racist remark, "It's up to us, who are the dominant race, to watch out or these other races will have control of things" (pg18). In the first three chapters nothing of much significance is mentioned about Gatsby, and it is only once we reach the third chapter that we find out a bit about him. Gatsby himself has two different personalities that we could contrast. There is evidence at the beginning of the book to show that he is a single, lone, quiet and mysterious man, maybe even a criminal, "When I looked once more for Gatsby he had vanished" (pg25). ...read more.

Wolfshiem, described him as "handsome to look at and a prefect gentleman" (pg 70). Nick also describes him as someone with tight skin drawn unusually tight on to his face, with bright, tired eyes, and someone with a broad flat hand. Gatsby tries to show off his wealth a lot through the novel, with his big house, his free fancy parties, his nice car, being well dressed and especially when he shows Daisy around the house. At the beginning Nick questions the truth about Gatsby's education, when he does not believe that Gatsby went to Oxford. The reason for this questioning is because Gatsby hurried the phrase, "educated at Oxford". I think that Nick prefers Gatsby to Tom, because when Tom claimed that Gatsby was a bootlegger, Nick straight away said, "Not Gatsby" and in my opinion, he knows Gatsby better than he knows Tom. He trusts Gatsby more, especially after he found out the truth about the relationship between Daisy and Gatsby, which puts away all his misinterpreted thoughts about Gatsby being a criminal. ...read more.

The first time that they met was in a restaurant, just after Nick and Gatsby had lunch. They all shook hands after Nick introduced them to each other, but the next time Tom looked, Gatsby had disappeared. "I turned towards Mr. Gatsby but he was no longer there" (pg 72). At this point I interpreted Gatsby to be a criminal, but the next few pages revealed everything, and you find out this he is actually in love with Daisy (a romantic). Two weeks later Gatsby meets Tom for the second time, at his house, after Gatsby started having an affair with Daisy, and his attitude towards Tom changed. He wants Daisy to tell Tom about their relationship. Overall Nick does not really describe Tom's feelings or behaviour very much throughout the novel. He mainly explains what is going on, and leaves you to interpret Tom the way you want. He concentrates more on Gatsby and his emotions, especially when it involves Daisy. From all this evidence I can conclude that Gatsby is portrayed as the hero, and Tom as the villain, implying that they are opposite characters in mind, and are therefore compared and contrasted as opposite to each other. ...read more.