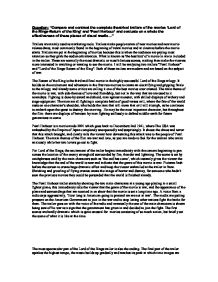 Compare and contrast the complete theatrical trailers of the movies 'Lord of the Rings-Return of the King' and 'Pearl Harbour' and evaluate on a whole the effectiveness of these pieces of visual media&amp;#133;

Question: "Compare and contrast the complete theatrical trailers of the movies 'Lord of the Rings-Return of the King' and 'Pearl Harbour' and evaluate on a whole the effectiveness of these pieces of visual media..." Trailers are mainly used as marketing tools. Trailers make people aware of new movies and new movie release dates, most commonly found in the beginning of rental movies and at cinemas before the movie starts. Trailers are put at the beginning of movies because this is when the audience are paying most attention so they grab the audience's attention. What is known as 'the best bits' of a movie in are in included in the trailer. These are normally the most dramatic or most hilarious scenes, making then make the viewers more interested in watching or wanting to see the movie. I will be analysing two trailers "Pearl Harbour" and "Lord of the Rings-Return of the King". Both of these trailers are modern and are based on the subject of war. The Return of the King is the third and final movie in the highly successful Lord of the Rings trilogy. It builds on the excitement and adventure in the first two movies to create an electrifying and gripping finale to the trilogy, and already some critics are calling it one of the best movies ever created. The main theme of the movie is war, with side themes of love and friendship, but not in the way that we are used to it nowadays. ...read more.

After this quote the music reaches its climax and pictures flash rapidly from the whole movie showing the severe ferocity this war has caused all over one little ring that hangs around Frodo's neck including close-ups of the character's faces show complete terror and torture. The final clip is of Sam yelling helplessly amongst rings of fire, this tells the viewer that the ending will be highly eventful. After watching the trailer the key question flashes though your mind, 'Will Frodo destroy the ring and save the world?' The only way to find out is to watch the full movie. The most electrifying part of the Pearl Harbour trailer is when the trailer starts to speed up with the yell, 'Warning of Japanese aggressive movements,' and the people in view are running away in fear from the soaring Japanese planes coming from the skies. It is now clear that Pearl Harbour is under attack! An interview with the president of the USA confirms this and then the footage of the attacking Japanese planes and bombs is shown, it is quite distressing and very realistic with state of the art scenes of boats and buildings being exploded into balls of flame. Close-ups on the faces of nurses rushing around frantically trying to save lives and soldiers trying to defend themselves in vain truly portrays how fearful and horrendous this attack was. The final dozen seconds of the Pearl Harbour trailer begin to flash different pictures of the state of Pearl Harbour during and after the invasion, the aircraft carrier which proved the braveness of ...read more.

The text is used to strengthen the aim of the film and trailer of showing the future how brave and selfless the American soldiers were and how much the citizens had to suffer during the Japanese invasion, it portrays U.S.A. as the strongest nation that can never be dissolved by war. On the whole the Lord of the Rings-Return of the King trailer was more effective as techniques used within the trailer completely matched the genre chosen. The viewer is kept enthralled right from the very start till the last second of the trailer, and anyone who watches the trailer will almost certainly go and watch the movie at the first possible opportunity. Effective use of music, storyline and camera-work makes the Lord of the Rings trailer the most competent trailer I have ever seen. Pearl Harbor is not bad by any means, but was not made as powerful as Lord of the Rings, and the music should have played a bigger part in making the trailer a success and making people rush to see the movie at the cinema. Furthermore, the two trailers show very different attitudes to war. Lord of the Rings portrays war as something not liked, but accepted and all men able to pick up a sword must do it. Pearl Harbour depicts war is a horrific and terrible thing that should only be the last resort in a bid to create future peace, the citizens are not forced to fight like in Lord of the Rings, but merely treated like heroes if they do. ?? ?? ?? ?? ...read more.