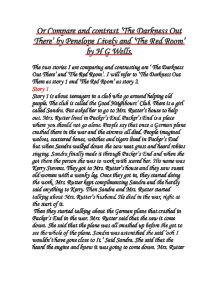 Compare and contrast 'The Darkness Out There' by Penelope Lively and 'The Red Room' by H G Wells.

Or Compare and contrast 'The Darkness Out There' by Penelope Lively and 'The Red Room' by H G Wells. The two stories I am comparing and contrasting are ' The Darkness Out There' and 'The Red Room'. I will refer to 'The Darkness Out There as story 1 and 'The Red Room' as story 2. Story 1 Story 1 is about teenagers in a club who go around helping old people. The club is called the Good Neighbours' Club. There is a girl called Sandra. Pat asked her to go to Mrs. Rutter's house to help out. Mrs. Rutter lived in Packer's End. Packer's End is a place where you should not go alone. People say that once a German plane crashed there in the war and the aircrew all died. People imagined wolves, scattered bones, witches and tigers lived in Packer's End but when Sandra walked down she saw neat grass and heard robins singing. Sandra finally made it through Packer's End and when she got there the person she was to work with scared her. His name was Kerry Stevens. They got to Mrs. Rutter's house and they saw sweet old women with a wonky leg. Once they got in, they started doing the work. Mrs. Rutter kept complimenting Sandra and she hardly said anything to Kerry. Then Sandra and Mrs. Rutter started talking about Mrs. Rutter's husband. He died in the war, right at the start of it. Then they started talking about the German plane that crashed in Packer's End in the war. Mrs. Rutter said that she saw it come down. She said that the plane was all smashed up before she got to see the whole of the plane. ...read more.

Sandra thinks that she is superior to Kerry because he wants to become a mechanic and she wants to become a secretary. She says this with great emphasis as if it is the only job that is the best unlike being a mechanic. She was surprised when she found out that Kerry Stevens was in the good Neighbour's club. 'Didn't know you were in the good Neighbours club!' She only thought that people who want to become sectaries or people like that were in the club. She thinks that the people who are like her (people who want to become secretaries) belong in the club. In story one Sandra always seems to be criticizing Kerry and sometimes she seems not to care. In Story 1 I think Sandra's character is a person who thinks they are superior and does not care about anybody else except for himself or herself. At the end of story it turns out that Kerry is morally superior that Sandra because she does not understand it that Mrs. Rutter is a murderer but Kerry maintains his dignity by rejecting Mrs. Rutter and her activities. In Story 1 Kerry Steven's character is not thought as the same character as Sandra. He wants to become a mechanic. He is thought to be less superior just because he wants to become a mechanic but when Mrs. Rutter tells the story he is first to realize what she had done. In the story Mrs. Rutter always gave him the work and always complimented Sandra. He always had to do all the work. In the story you think that Sandra is more superior to Kerry but at the end you find out that it is the other way around when Kerry first realizes that Mrs. ...read more.

He tells all of them that it is true that the room is haunted but they tell him that the room is not haunted but it was all in the mind. The two stories are a little bit similar because in both stories darkness is mentioned and people are scared of it. The darkness in Story 1 is Packer's End. Everybody is scared to go down it at night because of all the stories they heard about it and the darkness in Story 2 is the Red Room. People think it is haunted and start to imagine that ghosts exist and all sorts of things are happening but really it is happening in the mind. The fear of darkness will never go away as long as people still keep the fear in their hearts. When it is in the heart at night it automatically goes into your mind and you start to get scared of nothing really. The story I enjoyed most was Story 2 because it was more realistic than Story 1 because Story 2 kept you in more suspicion than Story 1. It gave you more description of the characters and I understood it more. When I read Story 1 I did not realize that Mrs. Rutter left the German man to die. When I read Story 2 once I understood it straight away that people are only scared about things they hear about because darkness is involved and that there were no ghosts really it was in the head and that it was a not a ghost who was blowing the candles out, it was the cold breeze coming from the door. Story 1 is a good Story 2 but I think that Story 2 is better. By Pavinder Heer ...read more.