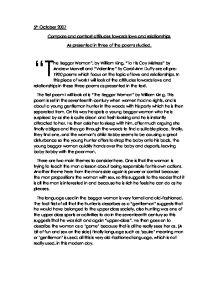 Compare and contrast the difference between modern day and pre-1900 poems on the topic of love and relationships?

5th October 2007 Compare and contrast attitudes towards love and relationships As presented in three of the poems studied. "T he Beggar Woman", by William King, "To His Coy Mistress" by Andrew Marvell and "Valentine" By Carol-Ann Duffy are all pre-1900 poems which focus on the topic of love and relationships. In this piece of work I will look at the attitudes towards love and relationships in these three poems as presented in the text. The first poem I will look at is "The Beggar Woman" by William King. This poem is set in the seventeenth century when women had no rights, and is about a young gentleman hunter in the woods with his party which he is then separated from. On his way he spots a young beggar woman who he is surprised by as she is quite clean and fresh looking and he is instantly attracted to her. He then asks her to sleep with him, after much arguing she finally obliges and they go through the woods to find a suitable place. Finally, they find one, and the woman's child Bobby seems to be causing a great disturbance so the young hunter offers to strap the baby onto his back. The young beggar woman quickly hands over the baby and departs, leaving baby Bobby with the poor man. There are two main themes to consider here. One is that the woman is trying to teach the man a lesson about being responsible for his own actions. ...read more.

Another few lines, which really caught my eye, were "Thou by the Indian Ganges' side Should'st rubies find: I by the tide Of Humber would complain, I would Love you ten years before the flood, And you should, if you please, refuse Till the conversion of the Jews." This is again because it shows the real extent of how much this man wants this woman and is love with her. He sees himself as being almost inferior to her which usually wouldn't happen in the seventeenth century, the time when the poem was written because just like in the time of "The Beggar Woman" women had no rights or status, and everything was in favour of males because they were seen as stronger and superior compared to women. This man compares this woman to the River Ganges which is a sacred river in India. Again at the time the poem was written, England was beginning its exploration and discovery into the exotic east, which explains why Marvell used the River Ganges in his poem, the woman is obviously very flattered by this. He then goes on to compare himself to the River Humber in Hull, England. The River Humber isn't really very nice at all while the Ganges' is beautiful, hot and exotic. After this, he goes on to say how he's always loved her even ten years before the flood, and will continue to love her during the conversion of the Jews. The flood that is being referred to here is the one from Noah's Ark which is from the books of genesis which suggests ...read more.

that she's angry because of her beliefs about a commercial Valentines Day and not really taking much time or putting much effort in. Personally, I think that all these poems are linked but in different ways. There is only one way that I can think of and that is that they are all to do with love. Two of the poems "The Beggar Woman" and "To His Coy Mistress" both involve men trying to seduce women but in different ways. One just thinks that he can get whatever he wants because he is rich, the other man feels to get what he wants he must flatter this woman with many different compliments, but still scare her at parts by saying things like "it will be too late" and "worms will try that well-preserved virginity" but this is only done to persuade the woman that little bit more. In today's day and age a man would not just go up to a woman and proposition her with sex but back in the seventeenth century things were a lot different with men being the 'superior race' and women being the 'inferior'. Meanwhile, valentine is good for describing attitudes towards love and relationships. On the one hand, the woman doesn't like Valentines Day and the whole commercialised view of it but then she goes on to like it but would prefer giving an onion but this is understandable as it represents the good and bad times in a relationship, getting to know a person better and emphasising just how good or bad a relationship can be. Shiva Dhunna 11HLu ...read more.