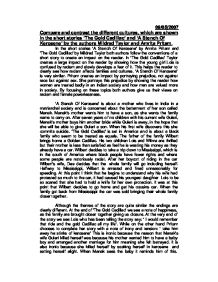 Compare and contrast the different cultures, which are shown in the short stories 'The Gold Cadillac' and 'A Stench Of Kerosene' by the authors Mildred Taylor and Amrita Pritam.

09/05/2007 Compare and contrast the different cultures, which are shown in the short stories 'The Gold Cadillac' and 'A Stench Of Kerosene' by the authors Mildred Taylor and Amrita Pritam. In the short stories 'A Stench Of Kerosene' by Amrita Pritam and 'The Gold Cadillac' by Mildred Taylor both authors follow the conventions of a short story to create an impact on the reader. In 'The Gold Cadillac' Taylor creates a large impact on the reader by showing how the young girl Lois is confused by racism and slowly develops a fear of it. This helps the reader to clearly see how racism affects families and cultures. 'A Stench Of Kerosene' is very similar. Pritam creates an impact by portraying prejudice, not against race but against sex. She portrays this prejudice by showing the reader how women are treated badly in an Indian society and how men are valued more in society. By focusing on these topics both authors give us their views on racism and female powerlessness. 'A Stench Of Kerosene' is about a mother who lives in India in a matriarchal society and is concerned about the betterment of her son called Manak. Manak's mother wants him to have a son, as she wants the family name to carry on. After seven years of no children with his current wife Guleri, Manak's mother buys him another bride while Guleri is away, in the hope that she will be able to give Guleri a son. ...read more.

We see this denial of her volition again when Pritam writes: 'Guleri was allowed'. Both of these lines are phrased in a passive voice, which creates an emphasis on Guleri's objectification. This is also evident during the conversation between Guleri and Manak: 'but he did not reply' and 'Manak did not ask again'. From the repetition of 'not' in both of these quotes the reader gets the impression that Manak is neglecting his wife Guleri. Although Guleri represents women from the culture portrayed in this story Manak's mother has more power than Guleri as she is a matriarchal figure and they live in a matriarchal society where all children must listen to their parents: 'Obedient to his mother' However, we could also get the impression that Manak's mother has simply internalised the cultural misogyny. We get this impression from when she says; ' Why do you croak like an old woman...be a man'. 'The Gold Cadillac' can be seen as quite similar to 'A Stench Of Kerosene; where the mother appears powerful as Dee has the power to stand up to her husband. This is portrayed after Wilbert has just brought the new car and Dee says: 'That Mercury wasn't even a year old'. And when she refuses to ride in the car: ' ...mother refused to ride anywhere'. From Dee's character we get the impression that she has power not only as a mother but also as a woman. ...read more.

We also see that mothers have the freedom to challenge the decisions of their husbands and are respected just like all the men. The ways in which the two stories are set are similar. ' A Stench Of Kerosene' is set in India; we get the impression that people get on well in this society. However, as the story progresses we realise the disadvantages faced by women. We are similarly misled in ' The Gold Cadillac' in fact it is not immediately that the family in the story is black until we get further into the story. At first we think that black people are equals in society until the family travels into the south and receives much discrimination. In both of the stories 'The Gold Cadillac' and 'A Stench Of Kerosene', the authors Mildred Taylor and Amrita Pritam attempt to convey the harsh realities of their respective culture. In Pritam's story women are not always treated as equals and in this case they are not respected unless they are married or are mothers. In Taylor's story she is attempting to show us that in America black people have not always been treated as equals. In each case the authors appear to be pitiful of the ways in which women and black people are belittled in society. We as the readers are shown this through the strong imagery, brevity of structure and the narrative impact. Both authors give us meaning and the reader is left with a wider knowledge of how culture informs the way in which people are treated depending on race and gender. ...read more.