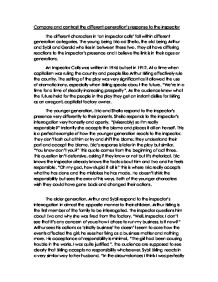 Compare and contrast the different generations in 'an Inspector calls'

Compare and contrast the different generation's response to the Inspector The different characters in 'an inspector calls' fall within different generation categories. The young being Eric ad Sheila, the old being Arthur and Sybil and Gerald who lies in between these two. They all have differing reactions to the inspector's presence and I believe the link is in their ages or generations. An Inspector Calls was written in 1946 but set in 1912. At a time when capitalism was ruling the country and people like Arthur Birling effectively rule the country. The setting of the play was very significant as it allowed the use of dramatic irony, especially when Birling speaks about the future. "We're in a time for a time of steadily increasing prosperity". As the audience knew what the future held for the people in the play they get an instant dislike for Birling as an arrogant, capitalist factory owner. The younger generation, Eric and Sheila respond to the inspector's presence very differently to their parents. Sheila responds to the inspector's interrogation very honestly and openly. "(Miserably) ...read more.

Arthur Birling is the first member of the family to be interrogated. The inspector questions him about Eva and why she was fired from the factory. "Well, Inspector, I don't see that it's any concern of yours how I chose to run my business. Is it now?" Arthur sees his actions as 'strictly business' he doesn't seem to care how the events affected the girl; he sees her firing as a business matter and nothing more. His acceptance of responsibility is minimal, "The girl had been causing trouble in the works, I was quite justified". The audience are supposed to see clearly that Birling accepts no responsibility whatsoever. Sybil Birling reacts in a very similar way to her husband. "In the circumstances I think I was perfectly justified". Sybil refused her a charity claim because she was prejudiced towards her because she chose to use the alias 'Birling'. This insulted Sybil as she didn't want to be associated with "She was claiming elaborate fine feelings and scruples that were simply absurd in a girl in her position". ...read more.

However, the younger generation know that whether the authorities know or not they still hurt people with their actions. Similarly to the interrogations Gerald displays both generations' opinions. He tries to get out of being responsible for the suicide but still accepts that what he did was wrong. An Inspector Calls isn't just about the Birling family and a ghoulish inspector. It's an allegory, in which people and things represent bigger ideas and themes about life. 'One Eva Smith is gone, but there are millions and millions and millions of Eva Smiths and John Smiths still left with us'. This quote reinforces the point of the younger generation. It doesn't matter if it was the same girl or not; whether the authorities know or not. All that matters is that people take responsibility for their actions. So, Eva Smith represents all poor and working class people who are being exploited. The Birling's represent all the privileged and wealthy upper classes who exploit them. The different reactions from the different age groups it is clear that this is Priestley's way of showing the audience that they still have time to change their ways and so do the audience. ...read more.

This essay makes some good points about the roles and purposes of different characters and links and comparisons are made to enhance the analysis. There should be further reference to the structure of the play and how it is used to shape meaning and some of the interpretations made could have been developed in far more depth.