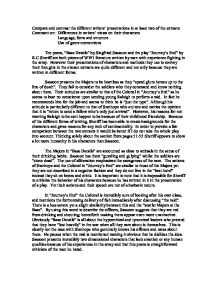 Compare and contrast the different writers' presentations in at least two of the extracts.

Compare and contrast the different writers' presentations in at least two of the extracts Comment on: Differences in writers' views on their characters Language, form and structure Use of genre conventions The poem, "Base Details" by Siegfried Sassoon and the play "Journey's End" by R.C Sheriff are both pieces of WW1 literature written by men with experience fighting in the army. However their presentations of characters and methods they use to convey their thoughts in the chosen extracts are quite different and not only because they are written in different forms. Sassoon presents the Majors to be heartless as they "speed glum heroes up to the line of death". They fail to consider the soldiers who they command and know nothing about them. Their attitudes are similar to that of the Colonel in "Journey's End" as he seems to bear no conscience upon sending young Raleigh to perform a raid. ...read more.

The use of alliteration emphasizes the savageness of the men. The actions of Stanhope and the Colonel in "Journey's End" are similar to those of the Majors yet they are not described in a negative fashion and they do not live in the "best hotel" instead they sit on boxes and drink. It is important to note that it is impossible for Sheriff to criticize the behavior of his characters because he has written in it in the presentation of a play. Yet their actions and their speech are not of a barbaric nature. In "Journey's End" the Colonel is incredibly sure of looking after his own class, and mentions the forthcoming delivery of fish immediately after discussing "the raid". There is a less severe yet a slight similarity between this and the "scarlet Majors at the Base". By using this word to describe the officers, Sassoon suggests that they are red from drinking and shouting; henceforth making them appear even more unattractive. ...read more.

Also the rhyming manages to link the two actions, making a stronger comparison. There are not really any stage directions in the dialogue between Stanhope and the Colonel which shows how there is really nothing for them to be doing, other than talking and drinking. Their speech is direct and straight to the point. Like in "Base Details" no imagery is used because they are both either blunt conversations or a blunt description. The two sections are incredibly different, because of the different origins they come from. Having been an officer in the army, Sheriff is not likely to criticize the type of people he worked amongst. However both writers seem to think there is a certain degree of hypocritical behavior surrounding the officers and their food and drink. Sassoon made a distant judgment on officers yet letting into account this section AND the rest of "Journey's End" the men with power in the army that Sheriff presents the audience are neither cold nor heartless. ...read more.