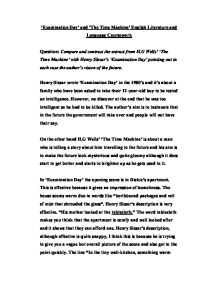 Compare and contrast the extract from H.G Wells' 'The Time Machine' with Henry Slesar's 'Examination Day' pointing out in each case the author's vision of the future.

'Examination Day' and 'The Time Machine' English Literature and Language Coursework Question: Compare and contrast the extract from H.G Wells' 'The Time Machine' with Henry Slesar's 'Examination Day' pointing out in each case the author's vision of the future. Henry Slesar wrote 'Examination Day' in the 1980's and it's about a family who have been asked to take their 12-year-old boy to be tested on intelligence. However, we discover at the end that he was too intelligent so he had to be killed. The author's aim is to insinuate that in the future the government will take over and people will not have their say. On the other hand H.G Wells' 'The Time Machine' is about a man who is telling a story about him travelling to the future and his aim is to make the future look mysterious and quite gloomy although it does start to get better and starts to brighten up as he gets used to it. In 'Examination Day' the opening scene is in Dickie's apartment. This is effective because it gives an impression of homeliness. The house seems warm due to words like "beribboned packages and veil of mist that shrouded the glass". Henry Slesar's description is very effective. "His mother looked at the tablecloth." The word tablecloth makes you think that the apartment is comfy and well looked after and it shows that they can afford one. ...read more.

He drained it, and it seemed to do him good: for he looked round the table, and the ghost of his old smile flickered across his face." the silent man, the doctor and the journalist. These characters are in the story from the beginning and have significance because they are the ones that the time traveller is telling the story to and they are asking questions that the reader may want to ask. This may indicate that they are inquisitive. The time traveller is also in control he is bossy and quite demanding at times- "I'm going to wash and dress, and then I'll come down and explain things. ...Save me some of that mutton. I'm starving for a bit of meat." Other characters that are mentioned are Blank, Dash and Chose whom you don't hear anything of apart from where it says, "You have told Blank, Dash and Chose about the machine?" Finally there is Mrs Watchett "Mrs Watchett came in and walked" this is the only place that you hear of her too. In this story the characters appearances are described better than their personalities and we only know them by their professions, which gives status to the Time Traveller's story. On the other hand in 'Examination Day' you learn more about their personalities. The technology in 'Examination Day' is very modern, there is machines like lie detectors. ...read more.

On the other hand 'The Time Machine' is a lot slower in speed and it describes the surrounding a lot more, giving the author a full impression of what the time traveller is looking at. At first the narrator is one of the dinner guests and then as the time traveller starts to tell his story the narration changes to him then a little time later it switches back again "I felt the same horrible anticipation, too, of an imminent smash." This is because the time traveller would be the only one talking in the story at the time and it draws the reader into the story as if they are listening to a bedtime story and so that the structure helps to maintain the interest of the reader. I found that overall Henry Sleaser's story was most effective because it had a strange twist at the end. The main differences between the two stories is that you can tell that 'Examination Day' was written almost one hundred years after 'The Time Machine' because it has the sort of technology in it that we have nowadays and in H.G.Wells' story the futuristic visions he has seem old to us. I think both authors achieved what they wanted to because they gave the reader a clear vision of what they think the future will be like. Nathalie Groves 10S ...read more.