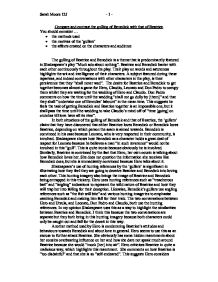 Compare and contrast the gulling of Benedick with that of Beatrice

Compare and contrast the gulling of Benedick with that of Beatrice. You should consider ... * the methods used * the motives of the 'gullers' * the affects created on the characters and audience The gulling of Beatrice and Benedick is a theme that is predominantly featured in Shakespeare's play "Much ado about nothing". Beatrice and Benedick banter with each other continuously throughout the play. Their play on words and astuteness highlights the wit and intelligence of their characters. A subject featured during these repartees, and indeed conversations with other characters in the play, is their persistence that they "shall never wed". The desire for Beatrice and Benedick to get together becomes almost a game for Hero, Claudio, Leonato and Don Pedro to occupy them whilst they are waiting for the wedding of Hero and Claudio. Don Pedro comments on how the time until the wedding "shall not go dully by [them]" and that they shall "undertake one of Hercules' labours" in the mean time. This suggests he feels the task of getting Benedick and Beatrice together is an impossible one, but it shall pass the time until the wedding to take Claudio's mind off of "time [going] on crutches till love have all its rites". ...read more.

However they are not as harsh as Hero and do not seem to have ulterior motive in criticising Benedick, although the same results are obtained in that he assesses his actions and thoughts. Leonato, Don Pedro and Claudio seem to be less cruel. I feel this is because they find the exercise of getting Benedick to change his mind about love and Beatrice is more of a game to entertain them, differing to Hero who vents her frustrations and anger towards Beatrice through her conversation with Ursula. Claudio comments on how Beatrice is "wise", but Don Pedro continues with this idea to say "in everything but in loving Benedick". This is a direct criticism of Benedick because they show that he is not good enough for Beatrice. The gullers comment on how they are "sorry for her" to have this "curse" of loving Benedick. Don Pedro comments on how Benedick "shows some sparks that are like wit". This mocks Benedick and his constant banter, sarcasm and jokes. This further accentuates the method to make Benedick evaluate his viewpoint and attitudes towards love and indeed Beatrice. Both sets of 'gullers' take this idea further by criticising one character, the one the conversations are aimed at, and then complimenting the other character. ...read more.

In contrast Hero's soliloquy is quite short and she immediately takes on board what Hero and Ursula have said about her and she is more surprised than Benedick about it. She makes an immediate decision to reform and for her "maiden pride" to be forgotten. Initially she questions, "Can this be true?" But her immediate reaction is to change her old ways into ones that will not be "condemned". She decides, quite easily like Benedick does, that she will "requite" his love, and that she will prove she is worthy of his love so others will say she "dost deserve" it. I think the affect of the gulling on the audience is one of surprise because the plan was quite sneaky and cunning. The audience learn as the play progresses what is happening in these scenes, as the plan is not totally revealed before. So as the plot unravels, the audience realise it. I think the audience would feel a bit confused about Hero's harsh nature in her speech with Ursula. It is also taken more seriously because that scene is in verse, whereas the scene with Benedick's gulling is in prose, showing it to be more of a joke. The similarities between the gulling of Benedick highlights the way the characters are similar in that it must be done with similar methods. Also Sarah Moore 12J - 1 - ...read more.