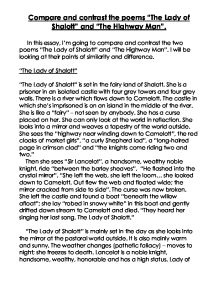 Compare and contrast the poems The Lady of Shalott and The Highway Man.

Compare and contrast the poems "The Lady of Shalott" and "The Highway Man". In this essay, I'm going to compare and contrast the two poems "The Lady of Shalott" and "The Highway Man". I will be looking at their points of similarity and difference. "The Lady of Shalott" "The Lady of Shalott" is set in the fairy land of Shalott. She is a prisoner in an isolated castle with four grey towers and four grey walls. There is a river which flows down to Camelott. The castle in which she's imprisoned is on an island in the middle of the river. She is like a "fairy" - not seen by anybody. She has a curse placed on her. She can only look at the world in reflection. She looks into a mirror and weaves a tapestry of the world outside. She sees the "highway near winding down to Camelott", the red cloaks of market girls", "a curly Shepherd lad", a "long-haired page in crimson clad" and "the knights come riding two and two." Then she sees "Sir Lancelot", a handsome, wealthy noble knight, ride "between the barley sheaves". ...read more.

"Some bearded meteor trailing light" - metaphor with some degree of personification. There is the use of pathetic fallacy at the start of section IV, this is where the weather mirror events - "stormy east wind straining" but the death itself is peaceful, and so there is little 'sound'. The only onomatopoeia is "the mirror cracked" and this is at the dramatic climax of the poem; she has broken the curse and there is no going back. "The Highway Man" This poem is set in an isolated pub in the middle of the moors. It is as lonely and cut off as the castle of which "The Lady of Shalott" is imprisoned. There is a road outside the pub, just as by the river there is a road. In both cases the road brings destiny. In the pub lives Bess "the landlord's black-eyed daughter", Tim the Osler and the landlord. The Highway man rides down to the pub to see Bess, whereas in "The Lady of Shalott floats down the river to see Lancelot. Lancelot is a law-abiding knight and the Highway man is a criminal but both look handsome. ...read more.

corresponding to before and after the robbery. It also has a regular rhyme pattern but the rhythms are much less even, suggesting the varying pace of action. "The Highway man" opens with a threatening metaphor "torment of darkness". There is immediate movement "tossed" and the alliteration adds to the unease. The repetition "Riding, riding" suggest urgency, something relentless. There is much more life (realism) in this poem. It also has onomatopoeia plus alliteration "cobbles...clattered...clashed". There is much more dialogue "one kiss my bonny sweetheart". The use of punctuation devices; parentheses, dashes and exclamation marks adds to the reality of this poem. The use of italics adds emphasis to certain sections. The characters are described in greater detail and the beauty of Bess, "the black cascade of perfume", is in contrast with the unhealthy appearance of Tim, his "hair like moldy hay" (a very effective simile.) The poem is good at implying things with a simple line; "they (Soldiers) kissed her" says a lot about their values and invites comparison with the behaviour of the highway man. I think that "The Highway man" is much more effective and moved me more because it is more realistic, where as "The Lady of Shalott is more like a fairy tale. By Amy Nutton ...read more.