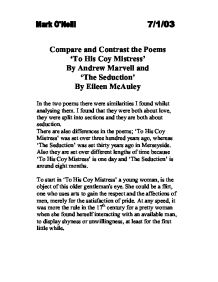 Compare and Contrast the Poems 'To His Coy Mistress' By Andrew Marvell and 'The Seduction' By Eileen McAuley In the two poems there were similarities I found whilst analysing them. I found that they were both about love, they were split into sections and they are both about seduction. There are also differences in the poems; 'To His Coy Mistress' was set over three hundred years ago, whereas 'The Seduction' was set thirty years ago in Merseyside. Also they are set over different lengths of time because 'To His Coy Mistress' is one day and 'The Seduction' is around eight months. To start in 'To His Coy Mistress' a young woman, is the object of this older gentleman's eye. She could be a flirt, one who uses arts to gain the respect and the affections of men, merely for the satisfaction of pride. At any speed, it was more the rule in the 17th century for a pretty woman when she found herself interacting with an available man, to display shyness or unwillingness, at least for the first little while. ...read more.

I feel that Andrew Marvell could take things slowly with her if that is what she wants, then that is what she should have. He is committed to the surrender, a conquest that can only come about as a result of him fully satisfying her and, no doubt it is his objective to satisfy her, though it may take a long time; and he would take pleasure throughout the long wait. At this point there appears to be a dramatic shift in tempo were it enters a different tense of writing style. In the second part of 'The Seduction' there is time gap between them of three months and we find out the girl is pregnant and the boy is no were to be seen. Most of the time the girl is unhappy and it quotes 'she sobbed in the cool locked darkness of her room'. We later realise that she was tricked by a horoscope in a girl's magazine. Through this trickery she ripped up the magazines and through them in the air, which it then spread out like confetti, and the word confetti is also used as meaning to deceive. ...read more.

The speaker also highlights that he will not be in the tomb with her, and she will be utterly alone. Whilst being alone Marvell says the 'worms' will make her lose her virginity by crawling in and out. The overall impression of Andrew Marvell's intention in this poem is to trick a woman into having sex with him by all means. In the last section it shows that they belong together and to be left uninterrupted. Andrew Marvell is desperate for this woman. He cannot wait, he begs her not to put off sexual agreement. He expressively points out that the cares of the moment do not matter as time is slowly by. I feel that all three sections of 'To His Coy Mistress' offers a particular view of gender relations, women are silent objects of men's desires, and men use their education and verbal skills to attempt to defeat or even obtain women sexually. In the poem 'The Seduction' Eileen McAuley portrays the way of life and the feelings you would have if you were a girl in that situation. Its partly sad but rewarding because it may make a decision for you in later life. I sense that the poem is autobiographical with the description given throughout the poem. ...read more.