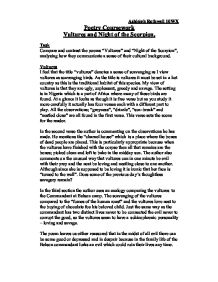 Compare and contrast the poems &quot;Vultures&quot; and &quot;Night of the Scorpion&quot;, analysing how they communicate a sense of their cultural background.

Ashleigh Rothwell 10WX Poetry Coursework Vultures and Night of the Scorpion. Task Compare and contrast the poems "Vultures" and "Night of the Scorpion", analysing how they communicate a sense of their cultural background. Vultures I feel that the title "vultures" denotes a sense of scavenging as I view vultures as scavenging birds. As the title is vultures it must be set in a hot country as this is the traditional habitat of this species. My view of vultures is that they are ugly, unpleasant, greedy and savage. The setting is in Nigeria which is a part of Africa where many of these birds are found. At a glance it looks as though it is free verse but as you study it more carefully it actually has four verses each with a different part to play. All the observations; "greyness", "drizzle", "sun-break" and "nestled close" are all found in the first verse. This verse sets the scene for the reader. In the second verse the author is commenting on the observations he has made. He mentions the "charnel house" which is a place where the bones of dead people are placed. ...read more.

In fact the monsoon conditions had affected the scorpion and all that it wanted to do was to shelter from the torrent. However it was disturbed by the poet's mother who was probably searching for rice to feed her family. She was stung and the poison from the tail entered her bloodstream like a foreign invader defiling the enemy territory. Many neighbours arrived and the author compares this to a "swarm of flies". I would compare it to students who clamour around desperate fro entertainment around a schoolyard fight or would be helpers around an accident victim. The neighbours like the helpers all had their suggestions many of their ideas involving the power, rituals and beliefs of religion. The scorpion is thought to be evil when in reality it is only trying to protect itself. The people believed that the victim and the scorpion were still linked. This bond meant that when the scorpion moved the poison inside the mother moved around her blood invading and conquering. Many prayers were said for the victim. The neighbours also felt that out of this tragic accident some good would emerge. ...read more.

Whereas 'vultures' is set in the middle of nowhere, somewhere like the deserted plains of Africa. It isn't something that would be found happening in a village. 'Scorpion' is a true story of the poets' family and it comes across through the detail and building of atmosphere the poem contains brought about by the phrase "ten hours of steady rain had driven him to crawl beneath a sack of rice". As he was there at the time his thoughts and feelings are brought across very well in his writing. The poem shows compassion when the "mother only said Thank God the scorpion picked on me and spared my children." Conclusion I prefer 'vultures' as I like the way in which evil is contained in good. This is shown in the phrase "in the very germ of that kindred love is lodged the perpetuity of evil". The evil is described in phrases such as "picked the eyes of a swollen corpse", "ate the things in its bowel" and "fumes of human roast". The good however is conjured up by "inclined affectionately" and "tender offspring. I feel it is more of a poem compared to Night of the Scorpion because Scorpion is a very much narrative style of writing. It is too narrative for my liking. ...read more.