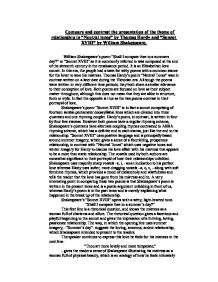 Compare and contrast the presentation of the theme of relationship in &quot;Neutral tones&quot; by Thomas Hardy and &quot;Sonnet XVIII&quot; by William Shakespeare.

Compare and contrast the presentation of the theme of relationship in "Neutral tones" by Thomas Hardy and "Sonnet XVIII" by William Shakespeare. William Shakespeare's poem "Shall I compare thee to a summers day?" or "Sonnet XVIII" as it is commonly referred to was composed at the end of the sixteenth century in the renaissance period. It is an Elizabethan love sonnet. In this era, the people had a taste for witty poems with a common stance for the lover to woo his mistress. Thomas Hardy's poem "Neutral Tones" was in contrast written on a later date during the Victorian era. Although the poems were written in very different time periods, they both share a similar relevance to their conception of love. Both poems are focused on love as their subject matter throughout, although this does not mean that they are alike in structure, form or style. In fact the opposite is true as the two poems contrast in their portrayal of love. Shakespeare's poem "Sonnet XVIII" is in fact a sonnet comprising of fourteen iambic pentameter decasyllabic lines which are divided into three quatrains and one rhyming couplet. Hardy's poem, in contrast, is written in four by four line stanzas. However both poems have a regular rhyming scheme, Shakespeare's quatrains have alternate coupling rhymes contrasted to ABBA rhyming scheme, which has a definite end to each stanza, just like the end to the relationship. ...read more.

The poem is shown to be complete as Shakespeare answers his original question here, summer will end but she will not be forgotten, as the poem is a sign of remembrance in her honour. The repeated use of "this" in the close of the poem is referring to the poem itself. It shows that through the poem, the mistress will live forever. "So long as men can breathe or eyes can see" - is an indication to how her beauty will live on for as long as the earth remains. The speaker shows his undying love for his mistress here. In contrast to this image of a perfect, perpetual love shown in Shakespeare's "Sonnet XVIII", Thomas Hardy gives an account of a failed love. In contrast to Shakespeare's use of summer imagery in the opening line, Hardy makes his view on love clear with the use of insipid colours "white" "gray" and winter imagery- "We stood by a pond that winter day" This alone creates a sad, sombre atmosphere, as winter is associated with death, like the death of the relationship. The tone of the first line is far from similar to the happy, witty tone shown in "Sonnet XVIII". The juxtaposition of winter imagery and of vowels: a, o, and u create a sense that the line is being dragged out, which achieves a sense of a static, lifeless relationship. ...read more.

The narrator is talking about other relationships he has learned from or possibly the lesson he has learnt from this woman. The tone of this stanza reflects his discontent and shows how, with the passing of time, his resentment has intensified. The final two lines of the poem present a very paradoxical idea of the relationship, as they imply that the more they talk, the less fond of each other they grow. The third line suggests that the narrator has become somewhat hateful towards the mistress. He refers to the mistress using "God-curst sun..." which is a use of negative imagery. The poem finishes on a very definite note. Hardy uses pathetic fallacy to show how everything is dead. The poem ends where it began, at the side of a pond, and as a sign of the end, the pond is "edged with grayish leaves" implying that their relationship is dead. Although both writers use very similar methods to show their experiences of love, the two methods contrast in relation to style and imagery. Both poems share the same topic and are very closely related in terms of form and meaning but a clear comparison can be made to distinguish the two different attitudes towards love and relationships. My preference is Hardy's poem, as I prefer the four by four line stanzas. I find this breaks up the poem better. The language describing this failed attempt at love compared to Shakespeare's poem of a thriving love, is to the point and creates a sense of pity towards the speaker. ...read more.