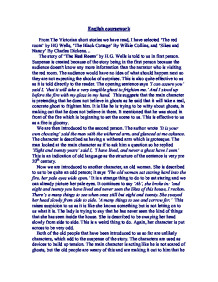 Compare and contrast - 'The red room' by HG Wells, 'The Black Cottage' By Wilkie Collins, and 'Sikes and Nancy' By Charles Dickens

English coursework From The Victorian short stories we have read, I have selected 'The red room' by HG Wells, 'The Black Cottage' By Wilkie Collins, and 'Sikes and Nancy' By Charles Dickens... The story of 'The Red Room' by H.G. Wells is told to us in first person. Suspense is created because of the story being in the first person because the audience doesn't know any more information than the narrator who is visiting the red room. The audience would have no idea of what should happen next so they are not expecting the shocks of surprises. This is also quite effective to us as it is told directly to the reader. The opening sentence says 'I can assure you' said I, 'that it will take a very tangible ghost to frighten me.' And I stood up before the fire with my glass in my hand. This suggests that the main character is pretending that he does not believe in ghosts as he said that it will take a real, concrete ghost to frighten him. It is like he is trying to be witty about ghosts, in making out that he does not believe in them. It mentioned that he was stood in front of the fire which is beginning to set the scene to us. This is effective to us as a fire is gloomy. We are then introduced to the second person. The author wrote 'It is your own choosing' said the man with the withered arm, and glanced at me askance. The character is described as having a withered arm which is grotesque. The man looked at the main character as if to ask him a question so he replied 'Eight and twenty years' said I, 'I have lived, and never a ghost have I seen' This is an indication of old language as the structure of the sentence is very pre 20th century. ...read more.

My next story is The black cottage by Wilkie Collins. The black cottage used some of the same techniques to build up the suspense in the story. In the beginning, The author addresses the reader. We are introduced to the story with 'I must take you back to the time after my mothers death, when my only brother had gone to sea, when my sister was out at service and when I lived alone with my father, in the midst of a moor in the west of England.' She is giving us a basic outline of how things were. By being told directly, we want to read on as we are being requested to listen to what she has to say. The story continues to describe the house they lived in, and its surroundings. The author seems to go into great detail on how the cottage is situated alone, as it is quoted 'The nearest habitation to ours was situated about a mile and a half off'. We are told about the security of the house. This information makes the reader ask 'why' the author has gone into such detail on the house alone as an introduction to the story. Creating the right place for the setting of a story is usually one of the most important features in creating a successful story. The setting can influence the reader's emotions and views on the story and also create an atmosphere for the storyline ahead. This is very important in spooky or chilling stories like "The red room" and "the black cottage" as the setting usually gives the reader a sense of foreboding. This is true in both stories with one being set in an old, haunted castle and the other being set in a lonely cottage being cut off from the outside world. We are told that the young girl 'Bessie' will be left alone the black cottage as her father had to go away due to his work. ...read more.

Dickens set the atmosphere and scene. Like the other authors, he included a 'candle burning'. A candle is very pre 20th century and is typical to Victorian times. In the text, Nancy goes to 'undraw the curtain' as Bill had hurled the candle under the grate. This shows the reader that he is quite violent. Bill then told Nancy to 'let it be, there's enough light for what I've got to do.' Immediately, more tension is raised as the reader is wondering what he is going to do. Nancy said 'Bill, why do you look at me like that?'. He was described to be looking at her with 'dilated nostrils and heaving breast'. We can now tell that he is angry at Nancy as he began to act violent towards her- example- he 'Grasped her by the head and throat, dragged her into the middle of the room, and placed his heavy hand upon her mouth.' There is a very strong use of emotive language here to describe the extent of his anger. He also produced his anger in words by calling her a 'she devil' and told her that 'every word you said was heard'. We are now left wondering what she had said. In a contrast to Bill's anger, Nancy pleaded with him. She was very OTT and sentimental in what she said to him as she pleaded for her life saying things like 'stop before you spill my blood!!! I have been true to you, upon my guilty soul I have!!!'. This showed Nancy's desperate attempt to plead Bill to spare her life. Bill grabbed the gun and 'beat it twice across the upturned face that almost touched his own'. This action creates more tension between the man and the woman. Nancy fell to the ground saying one last prayer 'for mercy to her maker' and those were her last words before bill 'seized a heavy club, and struck her down!!!'. In this passage, Violent Bill clashed with Nancy's innocence. Dickens added a lot of direct speech and action to build up tension and suspense in the passage. Hannah Aspin ...read more.