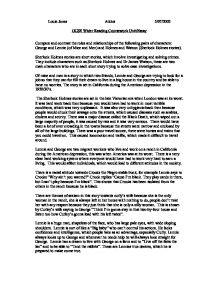 Compare and contrast the roles and relationships of the following pairs of characters: George and Lennie (of Mice and Men) and Holmes and Watson (Sherlock Holmes stories).

Louie Jones Atkins 5/07/2002 GCSE Wider Reading Coursework Unit/Essay Compare and contrast the roles and relationships of the following pairs of characters: George and Lennie (of Mice and Men) and Holmes and Watson (Sherlock Holmes stories). Sherlock Holmes stories are short stories, which involve investigating and solving crimes. They include characters such as Sherlock Holmes and Dr James Watson, these are two main characters who are in each short story trying to solve case investigations. Of mice and men is a story in which two friends, Lennie and George are trying to look for a job so that they can for fill their dream to live in a big house in the country and be able to have no worries. The story is set in California during the American depression in the 1920/30's. The Sherlock Holmes stories are set in the late Victorian era when London was at its worst. It was hard work back then because you would have had to work in most terrible conditions, which was very unpleasant. It was also very unhygienic back then because people would chuck their sewage onto the streets, which caused diseases such as scabies, cholera and scurvy. ...read more.

Lennie has a dream to live with George on a farm and to "Live off the fatta the lan" and to be able to "Tend the rabbits". These are Lennies true desires, which he is prepared to make come true. George is a small man who has sharp fascial features and small beadie eyes. George is a very caring man who is always looking after Lennie. He can sometimes be bossy towards Lennie. For example George says to Lennie "Well you ain't petting no mice while you walk with me". This proves that George wants to get his own way. George can also be easily tormented and get angry sometimes, which shows his real side, he expresses this by saying to George "Well, we ain't got any". George exploded. This shows that George can be easily tempted by Lennie to release his anger. George's dream is to be able to live on a farm in a big cottage with Lennie and "Live off the fatta the lan". With no worries or responsibilities. Sherlock Holmes is a "Singular character" as Watson describes him. He is a very knowledgeable man who always has an answer for everything. ...read more.

This doesn't offend them both because that's how people naturally spoke back then. Sherlock Holmes and Watson have a friendly relationship between them, for example Holmes says to Watson "I could not wish anything better than to be associated with my friend". This shows that Holmes likes to occasionally compliment Watson. For instance Holmes says to Watson "You have a grand gift of silence Watson". Said he "It makes you quite invaluable as a companion". This shows that Holmes likes Watson's valuable gift of silence. Holmes and Watson speak to each other in an upper-class manor. For example Holmes says to Watson "I would be very much obliged if you would slip your revolver into your pocket". This shows that they speak to each other in a polite manor. Others see Lennie and George as two hardworking men who are very ambitious and passionate towards their dreams. They see Lennie as a "Big baby", who can't control his temper. Others see George as a very protective and courageous man who is very caring. Others see Holmes and Watson as two upper-class typical friends. They see Watson as a quiet man, who is very inquisitive because he wants to know about every thing Holmes does. Others see Holmes as a very knowledgeable and well-respected man, who is excellent at whatever he does. They also see him as a master of disguise. ?? ?? ?? ?? ...read more.