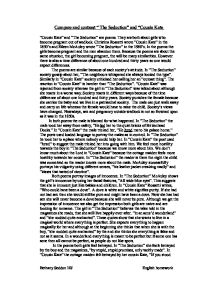 Compare and contrast " The Seduction" and "Cousin Kate "Cousin Kate" and "The Seduction" are poems. They are both about girls who become pregnant out of wedlock. Christina Rossetti wrote "Cousin Kate" in the 1850's and Eileen McAuley wrote "The Seduction" in the 1980's. In the poems the girls become pregnant and the men abandon them. Because the poems are about the same situation, the girl becoming pregnant, the will be many similarities. However there is also a time difference of about one hundred and thirty years so one would expect differences. The poems are similar because of each society's attitude. In "The Seduction" society gossip about her, "The neighbours whispered she always looked the type". Similarly in "Cousin Kate" society criticised her calling her an "outcast thing". The reaction in "Cousin Kate" is harsher than "The Seduction". "Cousin Kate" was rejected from society whereas the girl in "The Seduction" was talked about although she reacts in a worse way. Society reacts in different ways because of the time difference of about one hundred and thirty years. Society punishes the female because she carries the baby and we live in a patriarchal society. The male can just walk away and carry on life whereas the female would have to raise the child. Society's views have changed. Nowadays, sex and pregnancy outside wedlock is not so frowned upon as it was in the 1850s. ...read more.

Now she believes she will never have the happy ending. The girl in "Cousin Kate" feels betrayed by her cousin who marries the Lord that the cottage maiden loved, the man who made her pregnant. The quote above shows that she would not have married him but would have rejected him instead if it was the other way around. The cottage maiden believes that Cousin Kate's has married for mercenary reasons, not love. "Even so I sit and howl in dust/You sit in gold and sing." This shows the contrast between Cousin Kate and the cottage maiden. The cottage maiden was rejected because of her child and her affair with the Lord whereas Cousin Kate was accepted and became the Lord's wife. In both poems, the poets use clothing imagery. In "The Seduction", McAuley uses "and on that day she broke the heels of her high white shoes (as she flung them at the wall)." In "Cousin Kate" Rosetti writes "he wore me like a silken knot/he changed me like a glove." The white in "the high white shoes" represents purity and virginity and as they are broken it shows she has lost her virginity, that she is no longer pure. It also shows that she is angry, she wore them on the night of the conception of her child and she does not want them any more like she does not want her child. ...read more.

"Cling closer, closer" shows the strong bond between mother and son, that they do not want to be separated. The girls have sex because of different types of love. In "The Seduction" the girl fell in love with him because she drank so much, "as he bought her more drinks, so she fell in love". But in "Cousin Kate" she felt her love was true. "O Cousin Kate, my love was true/your love was writ in sand". In "The Seduction" she was blinded by the drink. As she got more and more drunk so she became convinced that she would encounter the love and the happy ending the magazines had promised her. In "Cousin Kate" the maiden believes her love to be the real thing while Cousin Kate's love was temporary, it could washed away as easily as writing on the sand. The maiden has sex before marriage because she was in love and she thought he felt the same way but the girl in "The Seduction" was drunk and made a stupid decision because she was not thinking clearly. I quite like both poems. I like "The Seduction" because it is closer to the time period I live in. I can relate to different parts of the poem. I also enjoyed some of the imagery like the "confetti" imagery and "eyes blue as iodine". Although I like "The Seduction" I prefer the writing technique in "Cousin Kate". The rhyming scheme is much better and the use of poetic terms throughout the poem gives a clear view on the maiden's thoughts and feelings. Bethany Seddon 10J English homework ...read more.