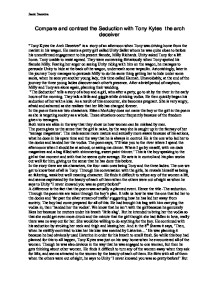 Compare and contrast the Seduction with Tony Kytes the arch deceiver

Compare and contrast the Seduction with Tony Kytes the arch deceiver "Tony Kytes the Arch Deceiver" is a story of an afternoon when Tony was driving home from the market in his wagon. He meets a pretty girl called Unity Sallet whom he was quite close to before his unconfirmed engagement to his present fianc�e, Milly Richards. Unity asked Tony for a lift home. Tony unable to resist agreed. They were conversing flirtatiously when Tony spotted his fianc�e Milly. Fearing her anger on seeing Unity riding with him on the wagon, he manages to persuade Unity to hide at the back of the wagon, underneath some tarpaulin. Astonishingly, later in the journey Tony manages to persuade Milly to do the same thing getting her to hide under some sacks, when he sees yet another young lady, this time called Hannah. Unavoidably, at the end of the journey the three young ladies discover each other's presence. After a brief period of mayhem, Milly and Tony are alone again, planning their wedding. "The Seduction" tells a story of a boy and a girl, who after a party, go to sit by the river in the early hours of the morning. ...read more.

They are described very superficially as stereotypes of manipulative ladies, for example when Unity says 'and-can you say I'm not pretty, Tony? Now look at me!' he looks at her for a while, then replies 'In fact, I never knowed you was so pretty before!' But when he sees Milly he ushers Unity into the back then tried to get rid of Milly by making up a lie about seeing her mother in town and how he thought that she was waiting for her. But Milly's mother is safely at home so Milly gets into the wagon. Tony once again turns on the charm when he sees Hannah. He says to Milly, 'My dear Milly- my coming wife...' He then gets her to get under some old sacks. But once he is left alone with another girl he decides to go for her instead! He calls her 'Sweet Hannah' then actually asks her to marry him. The story was set in countryside. This may explain the reasons for many girls to go after Tony. Tony doesn't't sound very appealing or handsome according to the description given about him. It says his face was ' round, firm and tight' he also had scars left from smallpox and rarely smiled, but the girls may have gone after him because of where they were. ...read more.

These few words express the situation in its entirety; its negative nature, that it is a purely female problem and that it is inescapable." I think that if these situations could possibly happen in present times but females are much more aware of sexual roles. They also have more opportunity and ambition. They would not be caught up in the fantasy of having a family. They would want a family at some point but are more realistic. They know that some so called men will take advantage of them if they are not careful. However, it must be remembered that sexually women are more in control these days and could easily seduce a man. The problem is that if a woman seduces a man there is only a psychological effect. Women can be affected by a unwanted pregnancy. I am not saying that a women seducing a man is right, but in my opinion when a man gets a girl pregnant and leaves her it is a very disgraceful thing to do. I think that men like this are criminals. A women has a right just like any one, they should not be violated in any way. I have used this website to enable me to streamline my coursework. Some points have been taken directly. I have used about two paragraphs. http://www.essaybank.co.uk/free_coursework/886.html ?? ?? ?? ?? Jason Desouza ...read more.