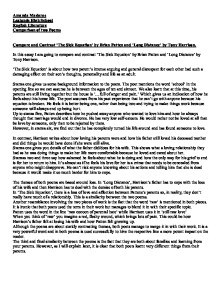 Compare and Contrast 'The Sick Equation' by Brian Patten and 'Long Distance' by Tony Harrison.

Amanda Madaras Lealands High School English Literature Comparison of two Poems Compare and Contrast 'The Sick Equation' by Brian Patten and 'Long Distance' by Tony Harrison. In this essay I am going to compare and contrast 'The Sick Equation' by Brian Patten and 'Long Distance' by Tony Harrison. 'The Sick Equation' is about how two parent's intense arguing and general disrespect for each other had such a damaging effect on their son's thoughts, personality and life as an adult. Stanza one gives us some background information to the poem. The poet mentions the word 'school' in the opening line so we can assume he is between the ages of ten and sixteen. We also learn that at this time, his parents are still living together but the house is '...full of anger and pain.' Which gives us an indication of how he feels about his home life. The poet assumes from his past experience that he can't go with anyone because his equation is broken. He feels it is better being one, rather than being two and trying to make things work because someone will always end up being hurt. Up to stanza five, Patten describes how he pushed away anyone who wanted to love him and how he always thought that marriage would end in divorce. He has very low self-esteem. He would rather not be loved at all than be love by someone, only then to be rejected by them. ...read more.

In 'The Sick Equation', the topic is of a much more grim and psychological nature. Patten's parents had an unstable relationship and were continuously arguing which was bound to have a severe effect on Patten. His childhood was not a happy one as he felt he was '.....in a raw cocoon of parental hate.'. This is such a powerful line, as you perceive a cocoon as an enclosed space you cannot escape from. He felt trapped in his parents hate and he could not break free. 'I grew-or-did not grow' is a line in 'The Sick Equation' which describes as he felt. The consequences of the horror he witnessed at home left him physically, a grown man, but mentally, a scared little boy. Another theme is fear, as Patten, as an adult, was unnerved at the thought of being in a relationship because he thought it would mirror that of his parents. Therefore, he isolated himself from everyone, including family and friends, which meant he was very lonely - another issue raised in the poem. Possibly the main topic though, is anger. Throughout the poem, Patten discloses his anger by using strong diction such as 'raw', 'hate' and 'pain'. He is bitter and incensed that his parents' feuding has resulted in him becoming a lonely man with no one to love. Both poems are exceedingly diverse in relation to style as well. ...read more.

'New' and 'disconnected'. The reader now discovers that Harrison's father has passed away as well. However, instead of accepting it like he told his father to, he finds that he too cannot let go that easily. He still puts his parents' number in his new phone book and still rings the number even though it has been disconnected. Disconnected also describes the relationship Harrison now has with his parents. They are not a phone call or a car journey away; they are now permanently disconnected from his life. They are in a place where he cannot reach them. In 'The Sick Equation' Patten uses some strong diction to convey how unhappy his upbringing was. 'Raw'. 'Hate'. 'Anger', 'Pain', and 'Anguish' are just some of the vocabulary he uses to put this message across. In 'The Sick Equation', Patten uses the image of an albatross to describe divorce. The albatross comes from Samuel Taylor Coleridge's poem 'The Rime of the Ancient Mariner' where the mariner kills the albatross and, as a consequence, is made to carry it around his neck. It was a punishment and that is how Patten sees divorce, the punishment for getting married. 'I never let love stay long enough to take root,' is a metaphor Patten uses to express how he pushed away anyone who wanted to love him. He compares this with the roots of a tree because, like love, given the chance they can run very deep and are continuously growing. They stay rooted deep within the soil, like love in the soul. ...read more.