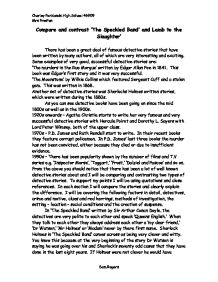 Compare and contrast 'The Speckled Band' and Lamb to the Slaughter'

Compare and contrast 'The Speckled Band' and Lamb to the Slaughter' There has been a great deal of famous detective stories that have been written by many authors, all of which are very interesting and exciting. Some examples of very good, successful detective stories are: 'The murders in the Rue Morgue' written by Edgar Allan Poe in 1841. This book was Edgar's first story and it was very successful. 'The Moonstone' by Wilkie Collins which featured Sergeant Cuff and a stolen gem. This was written in 1868. Another set of detective stories was Sherlocks Holmes written stories, which were written during the 1880s. As you can see detective books have been going on since the mid 1800s as well as in the 1900s. 1920s onwards - Agatha Christie starts to write her very famous and very successful detective stories with Hercule Poirot and Dorothy L. Sayers with Lord Peter Wimsey, both of the upper class. 1970s - P.D. James and Ruth Rendell start to write. In their recent books they feature corrupt policemen. In P.D. James' last three books the murder has not been convicted, either because they died or due to insufficient evidence. 1990s - There has been popularity shown by the number of films and T.V series e.g. 'Inspector Morse', 'Taggart,' 'Frost,' 'Dalziel and Pascoe' and so on. From the above you should notice that there has been a lot of well known detective stories about and I will be comparing and contrasting two types of detective stories. To support my points I will be using quotations and close references. In each section I will compare the stories and clearly explain the difference. I will be covering the following factors in detail, detectives, crime and motive, clues and red herrings, methods of investigation, the setting - location - social conditions and the creation of suspense. In 'The Speckled Band' written by Sir Arthur Conan Doyle, the detectives are very polite to each other and speak 'Queens English.' ...read more.

For instance a red herring in 'The speckled band' are the peculiar pets which the doctor keeps, the cheetah and baboon. Another red herring is the gypsies, which camp on the Stoke Moran property. When Julia say that it was the speckled band Helen told Holmes that the gypsies wear head bands which are speckled so Holmes thinks that the gypsies have something to do with the death of Julia. This again is leading Holmes and Watson off the case. We then compared 'The speckled band' clues and red herring with the 'Lamb to the slaughter' clues and red herrings we found that they were very different. There were very little clues and red herrings in the story because the murder was unplanned and the story is a short one. Although there was some clues and red herrings within the story. The leg of lamb was the murder weapon but the police failed to notice this whereas Holmes found every clue there was in 'The speckled band.' Already there are differences between the stories because the police didn't find any of the clues linked to Jack Maloney's death whereas Holmes found them all. As I said there were very little clues but there are quite a few red herrings, as there was in 'The speckled band.' A red herring in the 'Lamb to the slaughter' was that when Mrs Maloney went to the groceries acting very cheerful and happy as if there was nothing wrong. This is leading the police off from blaming Mrs Maloney for Patrick's murder because she wouldn't be acting cheerful if she had just killed her husband. Mrs Maloney uses the grocers for an alibi, which suddenly throws the blame off her. Another red herring is the way Mrs Maloney acts in front of the police. When she was talking to the police she put on innocent eyes and an innocent face and tilted her head, which gave the impression that, she would never hurt anyone let alone her husband. ...read more.

I'm going out." Just before he is about to tell her what wrong his eye starts to twitch. This creates suspense because you can see that Patrick is nervous. He is scared about what he is about to tell her. "She noticed there was a little muscle moving near the corner of his left eye." The author, Roald Dahl, creates suspense by the way that he describes Patrick's face being in a shadow beside the lamp. "So that the light from the lamp beside him fell across the upper part of his face, leaving the chin and mouth in shadow." After Mrs Maloney has murdered Patrick there is always the suspense of whether she is going to get caught or not. Throughout the story the police are constantly asking Mrs Maloney questions, which is creating suspense. The police investigation is always creating suspense, some places more than other. Mrs Maloney knows that she won't get caught because of her alibi, Sam the grocer. At the end of the story there is some irony and a twist. The police are saying that they think the murder weapon is right under their nose when they are eating up the lamb, which has actual kill Patrick. This is irony. This irony is quite funny because it make you laugh because Mrs Maloney is in the front room listening to the policemen talk and she hears them say it and she has a little giggle to herself. This makes the reader laugh. Its not just irony its called black irony. In conclusion there are many differences and similarities between 'The speckled band' and Lamb to the slaughter.' I have compared and contrasted the different ways the detectives acted. What crime the villain committed and why. The clues and red herrings in the two stories, which the villains had shown and had used in the murders. The different type of methods of investigation the detective undertook. Each stories settings, location and social conditions. Finally I have compared the different ways the stories created suspense. Chorley Parklands High School 46909 Mrs Preston Sam Rogers ...read more.