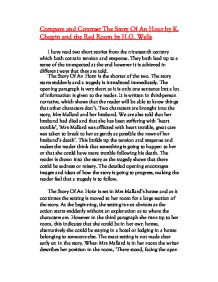 Compare and Contrast The Story Of An Hour by K. Chopin and the Red Room by H.G. Wells

Compare and Contrast The Story Of An Hour by K. Chopin and the Red Room by H.G. Wells I have read two short stories from the nineteenth century which both contain tension and suspense. They both lead up to a sense of the unexpected at the end however it is achieved in different ways that they are told. The Story Of An Hour is the shorter of the two. The story starts suddenly and a tragedy is introduced immediately. The opening paragraph is very short as it is only one sentence but a lot of information is given to the reader. It is written in third-person narrative, which shows that the reader will be able to know things that other characters don't. Two characters are brought into the story, Mrs Mallard and her husband. We are also told that her husband had died and that she has been suffering with 'heart trouble', 'Mrs Mallard was afflicted with heart trouble, great care was taken to break to her as gently as possible the news of her husband's death'. This builds up the tension and suspense and makes the reader think that something is going to happen to her or that she could have more trouble following his death. The reader is drawn into the story as the tragedy shows that there could be sadness or misery. The detailed opening encourages images and ideas of how the story is going to progress, making the reader feel that a tragedy is to follow. The Story Of An Hour is set in Mrs Mallard's house and as it continues the setting is moved to her room for a large section of the story. At the beginning, the setting is not obvious as the action starts suddenly without an explanation as to where the characters are. However in the third paragraph she runs up to her room, this indicates that she could be in her own house, alternatively she could be staying in a hotel or lodging in a house belonging to someone else. ...read more.

They help the reader to gain understanding of Mr and Mrs Mallard, they don't play important parts in the main body of the story but they are essential in Mrs Mallard's death. The story is told in third-person narrative, which means we are observing the action from outside the story. The narrator gives us an important insight to the story so that we know things that other characters don't, she involve us closely so that we know exactly what the character is feeling, we stay in the room with her and we know more than those outside. The narrator's language is very descriptive throughout, ' Her pulses beat fast and the coursing blood warmed and relaxed every inch of her body', which helps to set the scene of the story and understand the characters. The story ends as suddenly as it started. Mrs Mallard leaves her room after much persuasion by her sister, Josephine, and they both descended the stairs, she is now back to reality, in a world where such happiness can't last. She is described as a 'goddess of victory', showing a sense of surreal happiness that is too good to be true. The next paragraph begins with, 'Someone was opening the front door with a latchkey.' The short sentence builds tension and is evidence that only people that live in the house have keys, creating uncertainty and tension, which makes the reader think that it is Mrs Mallard's husband but previously we were told that he had died. Brently Mallard entered the house and was amazed to hear Josephine scream and see Richards try to hide him from his wife to stop her from getting a shock. Richards was too late and the doctors said she died of 'heart disease-of joy that kills'. The doctors thought that she was so overjoyed to see her husband that it was too much for her and the joy killed her. ...read more.